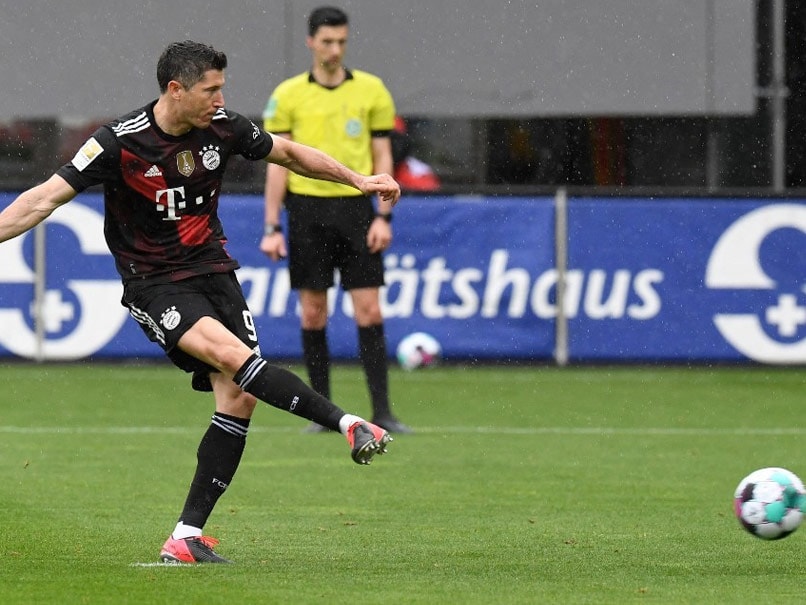 As part of his penalty celebrations, the Poland striker lifted his match shirt to reveal a picture of Gerd Mueller over the text "4ever Gerd".

"I would never have thought that this would happen. What Gerd Mueller did is incredible. Sharing the record with him makes me very, very proud," Lewandowski added.

The fixture was briefly halted after Lewandowski scored as his Bayern team-mates formed a guard-of-honour on the side of the pitch which the smiling 32-year-old ran through.

Freiburg drew level almost immediately when Manuel Gulde headed in at the near post from a corner on 29 minutes after slipping his marker.

Bayern, who were crowned German champions last weekend for the ninth season in a row, upped the tempo after the break.

Serge Gnabry had a goal disallowed six minutes into the second-half after the VAR spotted he was offside in tapping home a Leroy Sane cross.

However, the Bavarians kept up the pressure and when David Alaba's long-range pass found Thomas Mueller in the area just moments later, he squared for Sane who hit home on 53 minutes.

Freiburg had their chances to equalise as second-half replacements Lucas Hoeler and Janik Haberer both went close before Christian Guenter brought the sides level nine minutes from time.

Lewandowski can still break Mueller's record as Bayern have one match left of the campaign at home to Augsburg next Saturday.

He squandered a late chance to score "at least one more goal. You don't break records like that so quickly," added Lewandowski.

The former Borussia Dortmund forward, who has scored 47 goals in 39 games in all competitions this season, is also set to be crowned the Bundesliga's top-scorer for the sixth time in eight years.

"You need players who serve him passes. That's why I have to give the team a huge compliment."

"It's crazy. It's normal for Lewandowski to score, but this is something else," said Bayern forward Thomas Mueller.

"But he's only human, you saw that when it came to the 41st goal," Mueller joked after Lewandowski's late miss.

Elsewhere, bottom side Schalke, who are already relegated, pulled off a stunning 4-3 home win over Eintracht Frankfurt, who remain outside the Champions League places in fifth.

US striker Matthew Hoppe, 20, scored what proved to be the decisive goal to seal the win for Schalke which could have profound implications in the top four.

Both Borussia Dortmund, who are fourth before their away match at Mainz, and third-placed Wolfsburg, who travel to RB Leipzig, can secure Champions League qualification with away wins on Sunday.

At the foot of the table, Werder Bremen's 2-0 defeat at Augsburg pushed them into the bottom three, just above second-from-bottom Cologne who were held to a goalless draw at Hertha Berlin.