Even rivals fans cheered for Neymar when he scored a scintillating hat-trick and set up another goal as Santos defeated Cruzeiro 4-0 in Brazil's Serie A football championship. 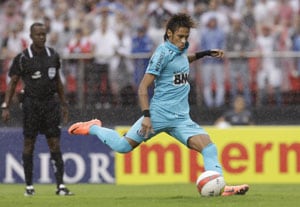 Even rivals fans cheered for Neymar when he scored a scintillating hat-trick and set up another goal as Santos defeated Cruzeiro 4-0 in Brazil's Serie A football championship.

He doubled his tally just before half-time with a low shot past goalkeeper Fabio after an error by Cruzeiro centre-half Mateus.

Neymar then set up Felipe Anderson just after the break before making it 4-0 after a fine Ezequiel Miralles run and cross from the right flank.

Such was the 20-year-old's brilliance that even Cruzeiro's home supporters rose to their feet and chanted his name after his third goal.

"Today is a historic day and I'm so emotional that I could cry," Neymar said after the match.

"I will carry what the Cruzeiro fans did today in my heart forever. Now I see Cruzeiro like my second home, I am really moved. The feeling is marvellous and it's why playing football is such a joy."

Santos coach Muricy Ramalho also lavished praise on his star player, saying Brazil was privileged to have a player of Neymar's talent.

"The Cruzeiro fans set an example to the rest of Brazil," Ramalho said.

"Neymar is a national idol and this will help him stay longer in Brazil. We appreciate the support and believe that he deserved it for the game that he played.

"He has no limits. The joy he has when playing football is amazing. There are players who become complacent but not Neymar. Every day he invents a reason to set new standards. We are lucky to be witnessing him," Ramalho added.

Comments
Topics mentioned in this article
Brazil Uruguay Football
Get the latest Cricket news, check out the India cricket schedule, Cricket live score . Like us on Facebook or follow us on Twitter for more sports updates. You can also download the NDTV Cricket app for Android or iOS.