Tottenham manager Harry Redknapp admits he sometimes finds it hard to focus on his job as he prepares to fight tax evasion charges which will come to court in July. 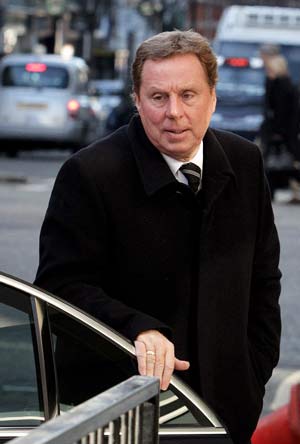 Tottenham manager Harry Redknapp admits he sometimes finds it hard to focus on his job as he prepares to fight tax evasion charges which will come to court in July.

Redknapp denies any wrongdoing, but he knows his reputation is in danger of being tarnished by all the allegations and he is desperate to win the case and clear his name.

The burden of dealing with the court proceedings has proved distracting, but with a Champions League second leg clash against AC Milan looming on Wednesday, Redknapp took time to answer his critics.

"If it wasn't me this wouldn't be happening," Redknapp told the News of the World. "I'm not a paedophile and I'm not a bank robber.

"I've done nothing wrong. I'm hurt by it, and it hurts my wife and family.

"I just want to get it out of the way and move on. It has been difficult to concentrate on the job at times, but I've managed to do it."

Redknapp, whose house was raided by the police four years ago, claims what has happened to him has been treated with disbelief by people who know him.

The High Court later ruled the search warrant used by City of London Police for the raid was invalid and Redknapp received £1,000 in damages.

"If I had done something wrong I'd be the first to hold my hands up and say 'yeah, okay'," he said.

"What I've had to go through is unreal, absolutely farcical. What happened to my wife, Sandra, was a disgrace.

"I'll wait for it to finish and then I'll have my say."

Comments
Topics mentioned in this article
Football Steven Gerrard Birmingham City Everton Liverpool Chelsea Arsenal
Get the latest updates on ICC T20 Worldcup 2022 and CWG 2022 check out the Schedule, Live Score and Medals Tally. Like us on Facebook or follow us on Twitter for more sports updates. You can also download the NDTV Cricket app for Android or iOS.