Spanish giants Real Madrid got off to a winning start in their Champions League group on Wednesday in a hard fought 1-0 win over Croatian side Dinamo Zagreb. 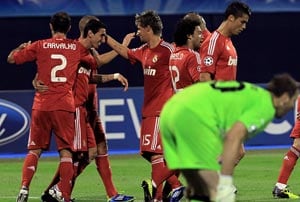 Spanish giants Real Madrid got off to a winning start in their Champions League group on Wednesday in a hard fought 1-0 win over Croatian side Dinamo Zagreb.

A second-half goal from Argentinian Angel di Maria was the difference between the sides, though, the hosts had goalkeeper Ivan Kelava to thank for restricting the damage.

The result may have satisfied Portuguese star Cristiano Ronaldo, but the refereeing of Norwegian Svein Moen for him left a lot to be desired.

"We are happy with the result as it is always good to get off to a winning start," said Ronaldo, who failed to add to his tally of 28 Champions League goals in 70 appearances.

"However, I hope we will not have a repeat of this refereeing performance, it was shameful," added Ronaldo, who received a lot of close attention and ended with a bloodied ankle after a tackle by Jerko Leko.

Fabio Coentrao also had a narrow miss, breaking into the hosts' area but his curled shot shaved the bar.

Dinamo, though, gradually came more into the game and while they found chances hard to come by, they more than held their own and were deservedly all square at 0-0 at half-time.

Real, though, resumed their early dominance at the start of the second-half keeping home 'keeper Kelava busy.

He had only just saved from Xabi Alonso when di Maria struck, superbly set up by Marcelo, in the 53rd minute.

Kelava kept the hosts in the match with several fine stops from Ronaldo and two from fullback Sergio Ramos as the Spanish side tried to ram home their advantage.

Comments
Topics mentioned in this article
Football Real Madrid Dinamo Zagreb
Get the latest updates on IPL 2021, IPL Points Table , IPL Schedule 2021 , live score . Like us on Facebook or follow us on Twitter for more sports updates. You can also download the NDTV Cricket app for Android or iOS.