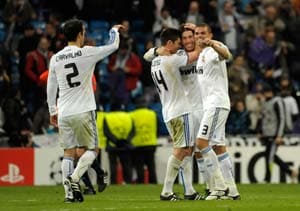 After the 3-0 victory in Nicosia last week Madrid can, barring a miracle, almost certainly look forward to a semi final place against the winner of the tie between Bayern Munich and Marseille.

Bayern are set to defend a 2-0 lead over the French side in Munich and look to be favourites to meet Madrid in the semi-final.

"I think for APOEL to reach the quarter-finals they can't be a weak team, they have beaten Lyon to get this far and we have great respect for them," Marcelo said.

"All players want to win the Champions League and I am no different, but there are many games ahead of us still.

"Madrid is always favourite to win any competition in which it competes, but we still have a lot of work if we are to be champions this season.

"We have to go into the game on Wednesday with our heads right and we'll do all we can to make sure we go through," he added.

Marcelo has been joined by team mates Xabi Alonso and compatriot Kaka in stating what the goals are for what remains of the season.

"The objective is to win both the league and the Champions League," agreed both players.

Madrid are certainly still on course for the first half of that double.

An important 5-1 victory on Saturday away to Osasuna, a problematic trip for Madrid in the past, means 'Los Blancos' remain 6 points ahead of Barca at the top of La Liga with 8 games remaining.

Cristiano Ronaldo was key on Saturday, scoring a double and creating two more for his side, in a stadium in which he had failed to win or score on his previous two visits.

The Portuguese star has also spoken of the club being on the right track for a Champions and La Liga double.

Another player hitting form at just the right stage of the season is Karim Benzema who scored two in the first leg in Cyprus and also grabbed a brace against Osasuna including a stunning volley that has been likened to Dutch legend Marco Van Basten's most spectacular efforts.

APOEL, the first Cypriot team to reach the knockout stage of the Champions League, started this season's journey back in July in the second qualifying round with a 2-0 victory at Albanian side Skenderbeu, and since then have produced some incredible performances.

APOEL will take heart from the fact that they held the Spanish giants for 73 minutes in the first leg and take the most from the chance to play in one of sports great arenas.

Two players who won't be available for APOEL are defender Marcelo Oliveira and striker Ivan Trickovski, both injured in the first leg.

Comments
Topics mentioned in this article
Football Real Madrid Apoel Nicosia
Get the latest updates on T20 World Cup, check out the T20 World Cup Schedule and Live Score . Like us on Facebook or follow us on Twitter for more sports updates. You can also download the NDTV Cricket app for Android or iOS.