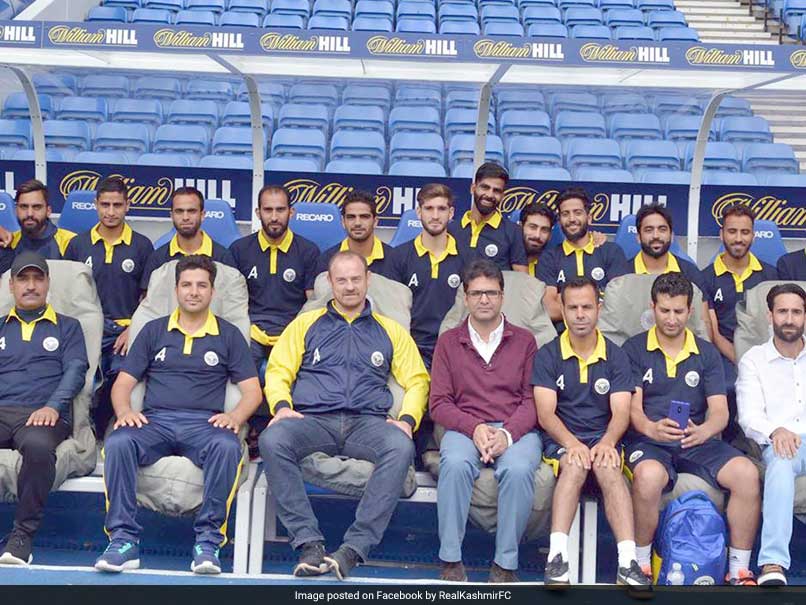 Real Kashmir FC on Wednesday became the first football club from Jammu and Kashmir to qualify for the country's top tier I-League after they won the second division league by beating Delhi side Hindustan FC 3-2. The side from the Kashmir Valley emerged winner of second division league as they secured seven points -- from two wins and a draw -- from three matches in the final round. Only the winning team of the second division league is promoted to the I-League. Real Kashmir FC will now play in the I-League season 2018-19. Real Kashmir scored through Ifham Tariq Mir (22nd minute), Danish Farooq (42nd) and Nadong Bhutia (67th) while Kushant Chauhan (34th & 80th) was on target for Hindustan FC at the FSV Arena.

David Robertson's Srinagar-based side only needed a point today to win the title and promotion on the final day of the 2nd Division League season, but they produced a clinically efficient performance to win the match and create history.

All India Football Federation congratulated Real Kashmir FC for clinching the 2017-18 2nd Division League to become the first club from Kashmir to qualify for the I-League.

"Congratulations Real Kashmir FC for becoming the first club from Kashmir to qualify for the I-League. I am sure the achievement will inspire the youth to take up the beautiful game and take our Country to higher echelons of International Football," AIFF President Praful Patel said in his statement.

AIFF General Secretary Kushal Das said, "The I-League finds a new centre in the next edition and AIFF's vision of a pan Indian league has further been substantiated. Congratulations and good luck for the next edition."

Hindustan FC started the match on a dominant note and created the first chance in the 17th minute when Nikhil Gehlot delivered a free-kick into the box, but Pawan Pratap Singh was unable to hit the target with his header.

That proved to be a costly miss as Real Kashmir took the lead five minutes later through Ifham, who collected a pass from Danish before calmly slotting past Mithun Samonto.

Hindustan FC then came close to levelling the scoreline in the 28th minute but Kushant's shot went wide of the target.

Kushant, however, redeemed himself by scoring the equalizer in the 34th minute. The striker latched on to a loose ball in the box following a neat interchange of passing with Nikhil to slot his shot into the top left-hand corner.

Real Kashmir restored their lead three minutes before half-time when a swift counter-attacking move allowed Danish the easiest of tap-ins.

Real Kashmir had further chances to add to their tally in first half stoppage time, but they failed to do so.

The second-half saw Real Kashmir on the ascendancy from the very beginning and unlike the first-half where they sat back and allowed Hindustan FC to play, the Kashmir side opted for a more aggressive attacking game which made them more dangerous.

However, the first clear chance of the second half went to Hindustan FC's way as Kushant almost scored a goal when he was left unmarked in the box. Fortunately this time for Real Kashmir, goalkeeper Sukhwinder Singh was well positioned to make a save.

Real Kashmir dominated the proceedings and create chances, the best of which saw Yao Kouassi Bernard put the ball just wide of the target 12 minutes after the restart. They made it 3-1 in the 67th minute when Nadong, who came in as a substitute, scored from Ifham's point-perfect pass.

Hindustan FC went all out towards the end and were rewarded with a goal in the 80th minute courtesy Kushant. The Delhi club ended second with four points from three matches.

In another game, local outfit Ozone FC and TRAU FC of Manipur played out a 0-0 draw to finish third and fourth respectively.