Rangers got back on track after their midweek meltdown against Celtic as Kyle Bartley's goal secured a 1-0 win at St Mirren on Sunday. 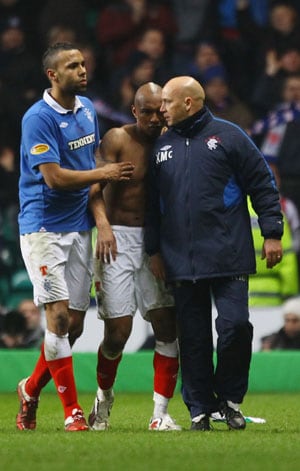 Rangers got back on track after their midweek meltdown against Celtic as Kyle Bartley's goal secured a 1-0 win at St Mirren on Sunday.

Walter Smith's side had three players sent off in a stormy Scottish Cup replay defeat at Parkhead, but the champions were able to move within five points of their Glasgow rivals thanks to Bartley's first half goal.

The on-loan Arsenal defender's winner means Rangers still control the destiny of the title as victory in their two games in hand on leaders Celtic would take them back into first place.

With Sasa Papac ruled out due to a head injury, Smith made one change from the team that crashed out at Celtic as he brought in David Healy at New St Mirren Park.

Smith was only able to name six substitutes due to the club's lengthy injury list, but Rangers still controlled the match and they threatened when El-Hadji Diouf slipped a pass through for Healy in front of goal who took a touch before unleashing the shot.

His effort was smothered by goalkeeper Paul Gallacher but the offside flag was raised anyway.

Rangers were quickly back in the ascendancy and Steven Davis curled in a dangerous free-kick that Gallacher managed to tip over.

The champions' pressure told in the 24th minute when Madjid Bougherra's cross from the left was met by Bartley at the back post and he rose highest to head home from close range.

It was Bartley's first goal since arriving at Ibrox on loan in January but St Mirren could have been back on level terms when David van Zanten teed up Kenny McLean, only for the midfielder to shoot wastefully over.

Rangers went close to increasing their lead soon after half-time when a Fleck corner picked out Maurice Edu and his volley dipped over the crossbar.

Edu should have doubled Rangers' advantage when he collected a Davis ball and looked set to smash home, only to see his effort fizz across the face of goal and wide instead.

Those misses didn't prove costly for Smith's side as they held on without any major alarms.

Comments
Topics mentioned in this article
Football Celtic Celtic Park
Get the latest updates on ICC T20 Worldcup 2022 and CWG 2022 check out the Schedule, Live Score and Medals Tally. Like us on Facebook or follow us on Twitter for more sports updates. You can also download the NDTV Cricket app for Android or iOS.