PSV Eindhoven grabbed the first position in the Dutch Eredivisie after a 5-1 win over Heerenveen, while FC Twente drew 0-0 against Vitesse. 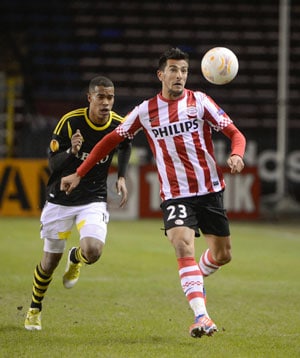 PSV Eindhoven grabbed the first position in the Dutch Eredivisie after a 5-1 win over Heerenveen, while FC Twente drew 0-0 against Vitesse.

Daniel de Ridder gave PSV an early scare Sunday by opening the scoring on behalf of Heerenveen, but PSV bounced back convincingly with goals by Luciano Narsingh in the first half and Dries Mertens, Georginio Wijnaldum and Tim Matavz's double in the second part, reports Xinhua.

In the clash between number three Vitesse and number one FC Twente both teams hardly had opportunities to score and hardly gave away any chance. The result was a boring stalemate.

PSV coach Dick Advocaat was not impressed by his team's first position after twelve match rounds.

"There are still so many matches to play, we will see where we stand in May next year," he reacted. "We stayed focused until the end, I think that is the biggest plus. We were even able to make some more goals."

Comments
Topics mentioned in this article
Football Liverpool Fenerbahce AC Milan PSV Eindhoven
Get the latest Cricket news, check out the India cricket schedule, Cricket live score . Like us on Facebook or follow us on Twitter for more sports updates. You can also download the NDTV Cricket app for Android or iOS.