PSG vs Bayern, Champions League: A 1-0 defeat in the second leg at the Parc des Princes could not prevent PSG from winning a tremendous quarterfinal tie on away goals 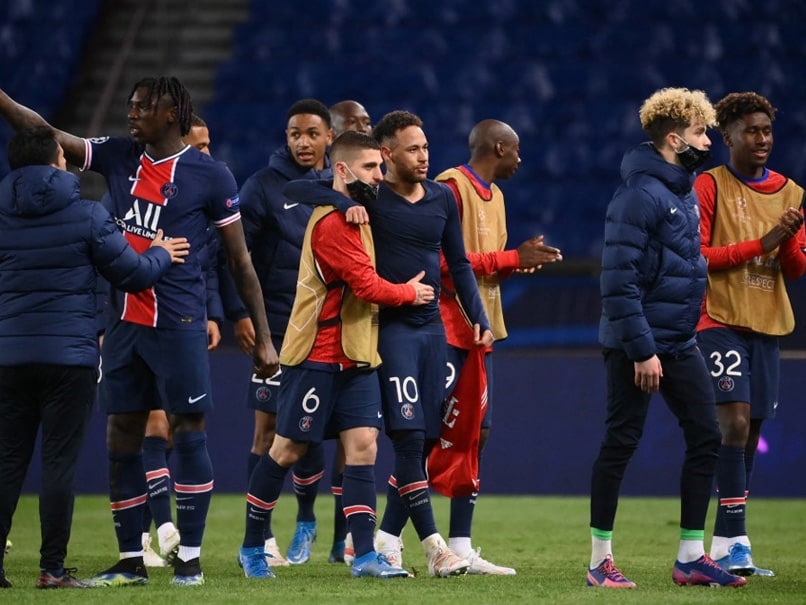 PSG knocked holders Bayern Munich out of the Champions League on Tuesday.© AFP

Paris Saint-Germain knocked holders Bayern Munich out of the Champions League on Tuesday despite Eric Maxim Choupo-Moting scoring against his old club as a 1-0 defeat in the second leg at the Parc des Princes could not prevent the French giants from winning a tremendous quarter-final tie on away goals. Neymar twice hit the woodwork for PSG in the first half and Choupo-Moting then put Bayern in front five minutes before the break. But the reigning European champions could not get the second goal they needed after losing 3-2 at home in the first leg last week.

PSG have revenge following their 1-0 defeat in last season's final in Lisbon, and the dream of winning a first European Cup remains alive for the Qatar-owned club.

Mauricio Pochettino's team, who had already eliminated Barcelona in the last 16, can now look forward to a semi-final against Manchester City or Borussia Dortmund.

"I am delighted, despite the defeat. We were facing a great team, the European champions, but we are going back to the semi-finals," Neymar told broadcaster RMC Sport.

"We are a real team. The most important thing is that we are through. Now we can aim for something even bigger."

Bayern will have to console themselves with trying to win a ninth consecutive Bundesliga title, and will wonder what might have been had the prolific Robert Lewandowski, or Serge Gnabry, been available for the two legs of this tie.

The future of coach Hansi Flick will come back into focus, too, given his frosty relationship with the club's sporting director, Hasan Salihamidzic.

"It is not because of tonight that we are eliminated," said captain Manuel Neuer.

"We deserved our win here, but the result in Munich was not good enough.

"It is not all negative. We won the Club World Cup, we have a good chance to win the Bundesliga too, so in the end it will be a positive season."

Bayern certainly played their part in an epic tie that will live long in the memory and deserved to be played before a full house both in Munich and here.

For all their injuries, their starting line-up was still impressive, and with Thomas Mueller leading from the front and coordinating their suffocating press, Bayern took the game to their hosts.

That suited PSG, who have produced their best performances this season away from home and could look to hit the Germans on the break with the devastating pace of Kylian Mbappe.

The Parisians, to be fair, were without two huge players of their own in captain Marquinhos and playmaker Marco Verratti, but they did have Mbappe and Neymar.

The Brazilian was left frustrated by a combination of Neuer and the frame of the goal in the first half.

Twice the Bayern goalkeeper saved from Neymar before the world's most expensive player hit a superb shot off the angle of bar and far post in the 37th minute.

On 39 minutes another breakaway finished with Mbappe squaring to Neymar, who this time saw his effort strike the base of the post.

Bayern could have been dead and buried, but within a minute of that they were in front on the night.

Mueller set up David Alaba for a first-time shot that Keylor Navas saved. The ball looped up to Choupo-Moting and he headed in.

The Cameroon forward, who scored once in 10 Champions League appearances across two seasons at PSG, now had his second goal against his old club in this tie.

Bayern could have scored again before the break as a thunderous strike by Alaba was stopped by Navas, keeping PSG ahead on away goals.

A goal for the home side would have calmed the nerves as they looked to avoid another dramatic exit from the Champions League like so many before over the last decade.

Neymar stretched but just could not connect with Di Maria's ball across goal at the start of the second half.

PSG lost left-back Abdou Diallo to injury and Bayern continued to push them back, looking for a crucial second goal.

Mbappe had an effort disallowed for offside, while another Bayern goal never arrived, and the final whistle was met with roars of delight from the home bench.

Eric Maxim Choupo-Moting Football
Get the latest updates on IPL 2021, check out the IPL 2021 Schedule and Indian Premier League Live Score . Like us on Facebook or follow us on Twitter for more sports updates. You can also download the NDTV Cricket app for Android or iOS.