Swedish star Zlatan Ibrahimovic, whose steady supply of goals has constituted the bedrock of PSG's tilt at a first league crown since 1994, this time turned provider, cutting in from the right to whip over a cross for Matuidi, lurking on the edge of the box. 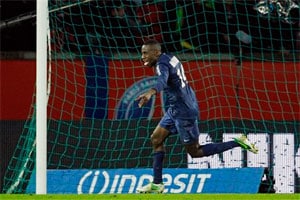 A first half injury-time goal from Blaise Matuidi gave Paris Saint-Germain a 1-0 victory in their top-of-the-table clash with Lyon at the Parc des Princes on Sunday as the capital club moved top on goal difference.

Swedish star Zlatan Ibrahimovic, whose steady supply of goals has constituted the bedrock of PSG's tilt at a first league crown since 1994, this time turned provider, cutting in from the right to whip over a cross for Matuidi, lurking on the edge of the box.

The French-born midfielder, whose parents are both Angolan, promptly launched himself to nod past Lyon keeper Remy Vercoutre.

PSG's success before a 43,000 crowd saw them move ahead of both Lyon and Marseille on goal difference with all three having garnered 35 points from 18 games.

"We were a bit surprised by the way Lyon lined up with five defenders," coach Carlo Ancelotti admitted.

"We played a strong match -- especially in the second half. We didn't take any defensive risks. We must still show solidity and consistency (but) since we lost at Nice a lot of things have changed.

"The players have worked hard and we deserve to be top of the pile."

Lyon's third defeat of the campaign was a further blow after they had dropped two home points in a midweek draw with rock-bottom Nancy while PSG had been grateful to an Ibrahimovic hat-trick in a 4-0 thrashing of Valenciennes.

And this loss extended their winless sequence against the Parisians to eight encounters.

Lyon gave as good as they got in the early exchanges despite Remi Garde's men missing the midfield creativity of the injured Yoann Gourcuff.

The Parisians, floating on a sea of cash from their Qatari owners but still trying to find the right blend in what has been an inconsistent campaign, will now hold on to pole position if they can win their final match of the year on Friday at Brest.

Lyon complete their 2012 programme on Saturday at home to Nice while Marseille finish off the year at the Stade Velodrome against fallen giants Saint Etienne.

That was a rare excursion into the danger zone from a visiting side playing five at the back and once PSG had their lead the hosts rarely looked like conceding their advantage.

On Saturday, Andre-Pierre Gignac's first goal since his return from injury guided Marseille to a 1-0 win over nine-man Toulouse after the latter had Cheikh M'Bengue and Franck Tabanou dismissed during the first half.

M'Bengue received a harsh straight red card for a lunge on Morgan Amalfitano on 25 minutes, while Toulouse goalkeeper Ali Ahamada saved a first-half penalty from Andre Ayew after Tabanou had impeded Jordan Ayew.

The home side were then reduced to nine men as Tabanou was sent off for a rash challenge from behind on Andre Ayew on the stroke of half-time, as Ahamada produced a couple of excellent saves from Joey Barton and Lucas Mendes to keep it goalless at the interval.

Saint Etienne saw any real hope of closing in on the top three recede after they went down to a 2-0 home loss to Lorient for whom former Arsenal man Jeremy Aliadiere hit the opener before Alain Traore sealed the win.

Nancy, buoyed by having held Lyon, prevented Bordeaux from moving into the top four by holding them to a 1-1 home draw.

Comments
Topics mentioned in this article
Football Blaise Matuidi Paris SG Marseille Zlatan Ibrahimovic Lyon
Get the latest Cricket news, check out the India cricket schedule, Cricket live score . Like us on Facebook or follow us on Twitter for more sports updates. You can also download the NDTV Cricket app for Android or iOS.