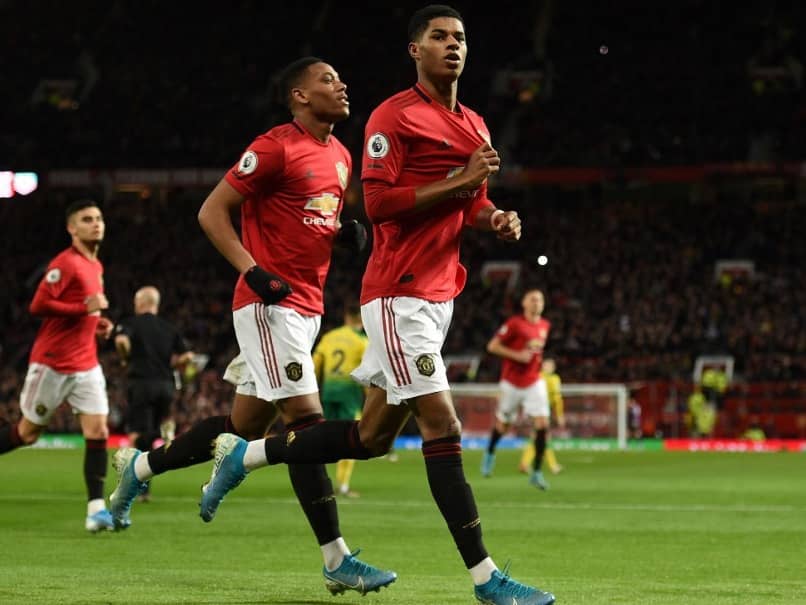 Marcus Rashford has now scored 14 goals in the Premier League this season.© AFP

Marcus Rashford marked his 200th appearance for Manchester United with two goals that restored some much-needed confidence in a 4-0 Premier League victory over bottom side Norwich. Anthony Martial and impressive teenager Mason Greenwood were also on the mark as Ole Gunnar Solskjaer's team maintained their hopes of qualifying for next seasons Champions League. Not for the first time this season, it was Rashford, who has now scored 19 times in his past 23 games for United and England, who was his team's key performer.

Rashford struck in the 27th minute after largely unrelenting United pressure with an instinctive finish, although the goal owed everything to a fantastic assist from Juan Mata.

The Spanish playmaker received a long pass from Victor Lindelof and, after Todd Cantwell backed off a little too far, had the space to float in a perfect cross which Rashford volleyed in from close range at the far post.

It was the England forward's 13th league goal of the season and goal number 14 -- his 19th in all competitions for the Reds -- would come from a second-half penalty to maintain what is comfortably the most productive season in the 22-year-old's career.

Given the much-publicised problems and inconsistency that have plagued United's season to date, Rashford has emerged as Solskjaer's most influential and important performer.

That was evident in the way his goalscoring skills were required to break down a Norwich side rooted to the foot of the table.

Solskjaer, who appeared almost shellshocked following his team's disastrous first half showing in the midweek 3-1 League Cup semi-final first leg home defeat to Manchester City, obviously did not underestimate the importance of collecting three points against the Canaries.

He opted to start England defender Harry Maguire, just days after the club briefed that he had suffered a torn hip muscle that was expected to sideline him for several weeks.

With United's injury problems particularly bad in the defensive department, Maguire's inclusion was a calculated gamble and it still required United keeper David de Gea to make a superb save late in the first half to keep their lead intact, diving well to claw away a curling shot from Cantwell.

But that was a rare lapse from a United side who dominated for the bulk of the game and should have been enjoying a more comfortable cushion by the interval.

That finally came with two goals in quick succession early in the second half, with Rashford heavily involved in the first of those after 52 minutes, playing a ball into the area for Brandon Williams to chase.

The young full-back winning a penalty after a rash challenge from keeper Tim Krul.

United had missed four of their previous eight penalties this season -- two in their win at Norwich before Christmas -- but Rashford made no mistake on this occasion with a firm strike into the bottom right-hand corner.

The Reds did not have long to wait for a third as Williams played a quick, short corner to Mata whose cross was headed in brilliantly by Martial.

Williams himself should have continued the rout moments later, missing an open net from three yards, before substitute Greenwood finally produced that fourth after 75 minutes, driving a left-foot shot past Krul from the edge of the area.

Norwich City Marcus Rashford Football
Get the latest updates on India vs England Series, India vs England , live score and IPL 2021 Auction . Like us on Facebook or follow us on Twitter for more sports updates. You can also download the NDTV Cricket app for Android or iOS.