Second placed Tottenham remain four points behind leaders Chelsea, who can extend that advantage to seven if they beat struggling Middlesbrough at Stamford Bridge on Monday. 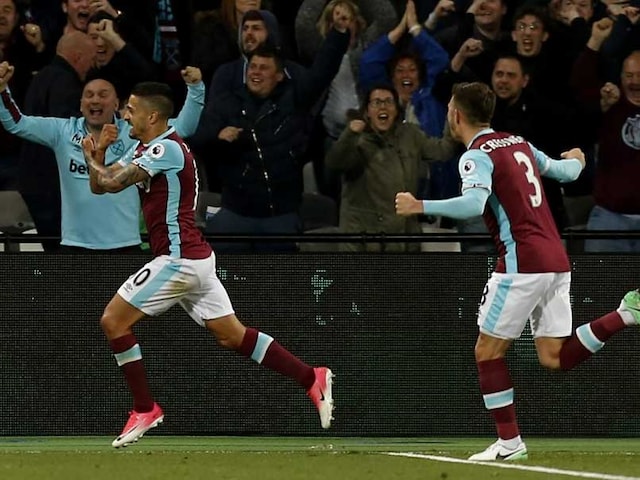 Manuel Lanzini scored the only goal in the match for West Ham United.© AFP

Manuel Lanzini left Tottenham's Premier League title challenge in tatters as the West Ham forward sealed a 1-0 win that put Chelsea within touching distance of being crowned champions. Mauricio Pochettino's side paid the price for a lethargic display at the London Stadium and Lanzini's second half strike may well have ended their hopes of winning the title for the first time since 1961.

Second placed Tottenham remain four points behind leaders Chelsea, who can extend that advantage to seven if they beat struggling Middlesbrough at Stamford Bridge on Monday.

Tottenham don't play again until they host Manchester United on May 14 and by then Chelsea, who travel to West Bromwich Albion two days earlier, may already be champions.

Conte hadn't planned to watch Tottenham's fate, preferring to go out for dinner with his wife and daughter, but if he was checking for updates from Stratford his dessert would have tasted even sweeter.

"The performance was not the best. We were a little bit sloppy when we conceded the goal," Pochettino said after Tottenham's first defeat in 10 league games.

"It's disappointing. It's not over, but now we have to wait. It's true it will be difficult to catch Chelsea."

After a troubled first year at their new stadium, this was a sweet moment for West Ham, who guaranteed their top-flight status for another year while delivering a potentially fatal blow to their hated rivals.

After a week of reports claiming Kyle Walker could leave Tottenham following a clash with Pochettino over his recent demotion to the bench, the England right-back was restored to the starting line-up in place of Kieran Trippier.

But, foreshadowing the anguish ahead, Walker's return almost got off to an embarrassing start when Andre Ayew's pass found Lanzini in space negligently left vacant by the Tottenham defender.

Fortunately for Walker, Lanzini dragged his shot harmlessly wide from a tight angle when a pass to Jonathan Calleri might have been the wiser option.

After a tepid start, Tottenham should have taken the lead midway through the first half when Harry Kane's 20-yard strike was pushed out by Adrian.

Dele Alli's follow-up was blocked back to Kane on the edge of the area and the Tottenham striker looked certain to score, yet once again he was denied as Adrian's out-stretched leg deflected it over.

Eric Dier's header from the resulting corner forced Adrian to make another alert stop, but moments later Tottenham were lucky not to fall behind.

Noble's pass sent Lanzini clean through and when Hugo Lloris raced off his line to block, West Ham saw their appeal for a foul turned down while Cheikhou Kouyate's weak follow-up was scrambed away.

So stylish in Sunday's win over north London rivals Arsenal, there was far less swagger about Pochettino's side as they struggled to turn their territorial dominance into a priceless goal.

There was no improvement in the second half and Ayew, left unmarked 18 yards out, should have made them pay as he blasted over.

Christian Eriksen, usually so composed, betrayed the anxiety creeping into Tottenham's play when he let Son Heung-Min's pass deflect harmlessly towards Adrian when a sight of goal came his way inside the West Ham area.

Son threatened with a thunderous effort, but Adrian tipped it away and Tottenham's nightmare scenario became a brutal reality in the 65th minute.

Unhinged by Aaron Cresswell's cross, the Tottenham defence parted too easily and when Ayew couldn't control, the ball ran to the unmarked Lanzini, who drilled home from close-range.

Shock etched on their faces, Tottenham were unable to muster a response.

It took a fine save from Lloris to deny Calleri and the sight of Eriksen shooting high into the stands was a fitting coda on a dispiriting night for Spurs.

Comments
Topics mentioned in this article
Tottenham Hotspur West Ham United Chelsea Football
Get the latest Cricket news, check out the India cricket schedule, Cricket live score . Like us on Facebook or follow us on Twitter for more sports updates. You can also download the NDTV Cricket app for Android or iOS.