The Clarets thought they had rescued a point when they equalised on the 87th minute, but Ragnar Klavan met Dejan Lovren's header in the final moments. 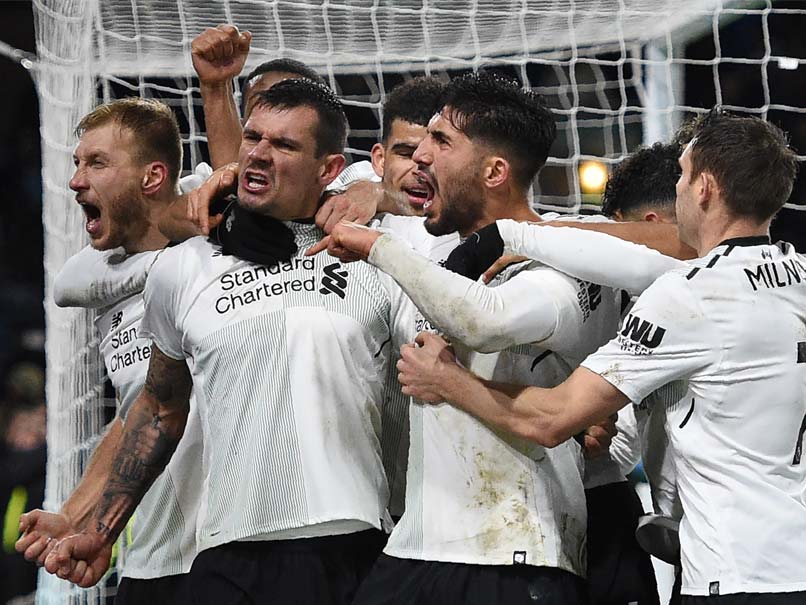 Liverpool needed an injury-time goal to edge Burnley 2-1 in their Premier League match on Sunday. The win moved them level on points with third-placed Manchester United. The Clarets thought they had rescued a point when they equalised on the 87th minute, but Ragnar Klavan met Dejan Lovren's header in the final moments. Sadio Mane had given Liverpool the lead on 61 minutes when he collected Trent Alexander-Arnold's cross and superbly drilled past Burnley keeper Nick Pope. Johann Berg Gudmunsson made it 1-1 with a far-post header.

But the Reds, who were without the injured Mohamed Salah and Philippe Coutinho, won it when Lovren's header from Alex Oxlade-Chamberlain's free-kick was turned in by Klavan.

Riyad Mahrez, Islam Slimani and Marc Albrighton were all on the scoresheet as Leicester City beat Huddersfield Town 3-0.

After a quiet first half, Mahrez opened the scoring on 53 minutes with a brilliant volley from Albrighton's cross, the Algerian's seventh goal of the campaign.

Moments later Shinji Okazaki thought he had made it 2-0 but the Japanese was adjudged to have fouled Tommy Smith.

On the hour, Slimani, starting in place of the injured Jamie Vardy, doubled the lead with a chipped finish over Jonas Lossl.

And Leicester, who gave a late debut to new signing Adrien Silva, completed the scoring in stoppage time with Albrighton tapping in a deflected Demarai Gray cross.

Striker Ayoze Perez's goal was enough to give Newcastle United a 1-0 victory at Stoke City, their third Premier League away win of the season.

The Magpies had several chances in the first half, including Ciaran Clark's miss from close range with an open goal.

Perez scored the only goal of the match on 73 minutes, turning in a Jacob Murphy cross from the right.

Comments
Topics mentioned in this article
Liverpool Leicester City Burnley Huddersfield Town Football
Get the latest updates on ICC T20 Worldcup 2022 and CWG 2022 check out the Schedule, Live Score and Medals Tally. Like us on Facebook or follow us on Twitter for more sports updates. You can also download the NDTV Cricket app for Android or iOS.