Former Manchester United forward Paul Pogba struck in injury time to hand Juventus a 2-1 win over Bologna on Wednesday as the champions opened up a six-point gap on Napoli. 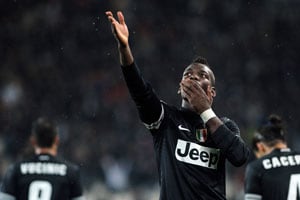 Former Manchester United forward Paul Pogba struck in injury time to hand Juventus a 2-1 win over Bologna on Wednesday as the champions opened up a six-point gap on Napoli.

Juventus looked set for a share of the points until Pogba got his head to a superb cross from the left from Sebastian Giovinco to beat Federico Agliardi from close range in the dying seconds.

Pogba had the ball in the net earlier in the game only to be ruled offside and he then hit the post with an exquisite shot on 16 minutes.

Juve finally broke the deadlock in the 54th minute through Fabio Quagliarella, but were brought level when French midfielder Saphir Taider latched on to a cross 15 metres out and beat a diving Gianluigi Buffon with a dipping angled drive.

The Turin-based giants' ninth win in 10 games extended their unbeaten run to 49 games and stretched their lead over Napoli to six points after Walter Mazzarri's side suffered a shock 1-0 defeat away to Atalanta.

Elsewhere, Inter Milan moved into second - four points adrift of Juve - with a come-from-behind 3-2 win over Sampdoria while Roma suffered a shock 3-2 defeat away to Parma and Lazio had to settle for a draw at home to Torino.

In another mid-table battle Udinese drew 2-2 with Catania.

AC Milan battled to a 2-2 draw away to Palermo on Tuesday.

Napoli had recently been the only team to keep pace with Juventus, whose last defeat was to Parma in May 2011.

However Napoli suffered a 2-0 reverse at the Juventus Stadium two weeks ago, when Pogba came off the bench to open his account with the Old Lady of Turin, and sneaked a 1-0 win at home to Chievo last weekend.

Although barely a third of the way into the campaign, Inter -- coached by 36-year-old Andrea Stramaccioni -- are emerging as Juventus's biggest danger.

It could not have started worse, however, for the nerazzurri.

A high freekick towards the Inter goal in the 20th minute caused confusion and as Samuel and as Andrea Ranocchia tried desperately to get to the ball Gianni Munari stole in to beat Samir Handanovic for Sampdoria's opener.

A trio of Latin American-inspired goals, however, soon had Inter well on their way to the win.

Argentine forward Milito levelled with his spot-kick in the 51st minute and after rattling the upright with a snap shot he turned provider for Inter's second goal on 68 minutes.

Antonio Cassano took the ball through midfield and was allowed to run unhindered towards goal. As the defence backed off, he fed the unmark Rodrigo Palacio to his right and the Argentine beat Sergio Romero in the Sampdoria net.

Cassano skimmed the crossbar with a well-struck freekick but then provided the assist in a well-worked move which saw Colombian Freddy Guarin beat Romero at his near post with a daisy-cutter.

Citadin Eder reduced the arrears for Sampdoria in the dying seconds.

Inter's eighth win pushed them up to second at the expense of Napoli, who have now suffered two defeats in as many weeks after failing to produce a reply to Chilean midfielder Carlos Carmona's 19th minute strike.

However Stefano Mauri brought the scores level for Lazio in the 57th minute.