Philippe Coutinho is on a season-long loan from Barcelona and has scored eight goals in 22 Bundesliga appearances for Bayern Munich. 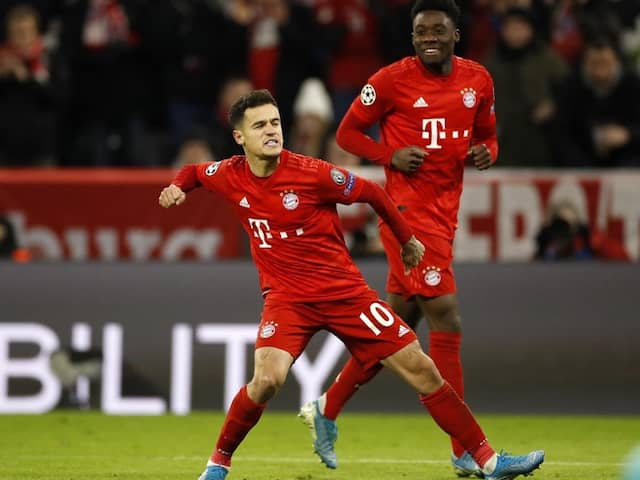 Bayern Munich midfielder Philippe Coutinho has undergone surgery to remove loose fragments from his right ankle and will be sidelined for at least two weeks, the club said Friday. The Brazil international is on a season-long loan from Barcelona and has scored eight goals in 22 Bundesliga appearances for Bayern. "Philippe Coutinho underwent an operation on his right ankle, during which loose joint fragments were removed," the club said in a statement. "The operation was a success. The Brazilian will begin his recovery program in around 14 days."

France midfielder Corentin Tolisso also had an operation earlier in the week on his ankle and will miss the league's potential restart date on May 9.

The Bundesliga is prepared to resume next month without spectators following the coronavirus outbreak but is awaiting the all-clear from the German government.

Defending champions Bayern Munich were four points clear at the top of the table when the league season was halted on March 13.

However, Bundesliga bosses said Thursday that they will be ready to resume from May 9.

The German Football League (DFL) still needs the go-ahead from Angela Merkel's government and state leaders, who will meet in Berlin next Thursday.

If the German league is granted permission to resume, the players will face a race to get match fit again and Werder Bremen director Frank Baumann shares Bobic's concern.

"Personally, I am rather sceptical that Bundesliga matches will be played again on 9 May," said Baumann.

"We have to wait and see what the government decides together with state leaders on April 30th."

According to the DFL's plan for the season to resume, hygiene guidelines will be issued to the players and club staff, who will be tested every few days.

The Ministry for Labour has even suggested players and match officials wear face masks and gloves during games, which has been greeted with scepticism by some clubs.

Bayern München Philippe Coutinho Football
Get the latest Cricket news, check out the India cricket schedule, Cricket live score . Like us on Facebook or follow us on Twitter for more sports updates. You can also download the NDTV Cricket app for Android or iOS.