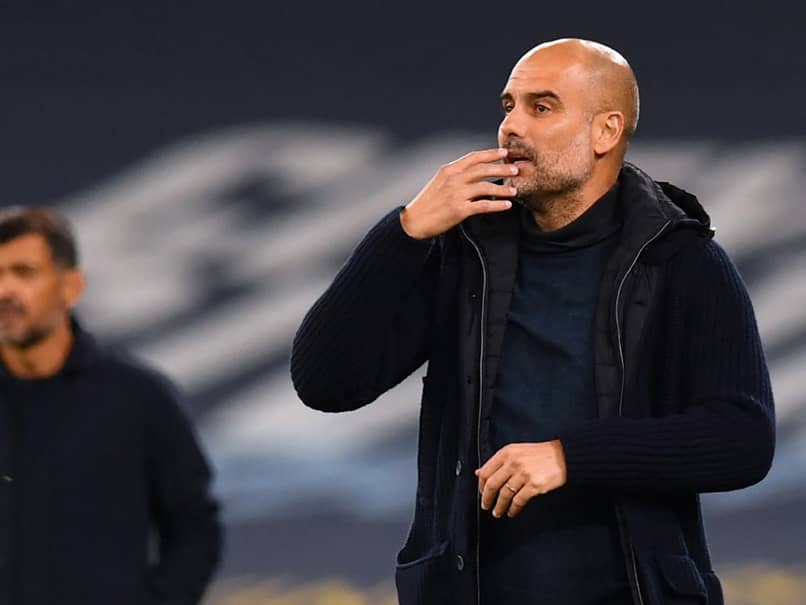 Pep Guardiola is fretting over the injury concerns to his players including Kevin De Bruyne.© AFP

Pep Guardiola admits Manchester City's lengthening injury list is a concern as they prepare for a gruelling schedule of three away games in the space of eight days. Wednesday's 3-1 Champions League win over Porto ended on a sour note as substitute Fernandinho limped off in the closing stages and the veteran Brazilian is expected to miss four to six weeks with a muscular problem. Summer signing Nathan Ake was missing from the match squad with what Guardiola described as a niggle in his groin.

Aymeric Laporte and Kevin De Bruyne were due back in training on Thursday, but resources are stretched ahead of a week in which City will travel to West Ham, Marseille and Sheffield United before facing Olympiakos at home on November 3.

"On Thursday we'll start with Kevin and Laporte training again, but I don't know how they'll come back," Guardiola said.

"We get players back and others we lose. In three days we go to London (to play West Ham) and then to France to play Marseille (on Tuesday) and then Sheffield (on Saturday). It's so demanding."

With Ake out, Guardiola turned to Eric Garcia as the want-away 19-year-old made his third appearance of the season, leaving John Stones to make do with a late substitute appearance after Fernandinho's injury.

Garcia is wanted by Barcelona and has said he will not sign a new contract with City before his existing deal expires next year, but Guardiola has not given up hope of keeping the player.

"I know he wants to leave, but maybe we can seduce him to extend his contract with us," Guardiola said with a smile. "He is a guy who is so stable in many, many things and I'm so happy (with him)."

Ilkay Gundogan, who found the net with a free-kick, is among those who have already missed time for City this season and said he was not yet back at full speed after testing positive for Covid-19 last month.

"If I'm honest, we are struggling a little bit with injuries and to lose Fernandinho towards the end of the game is another blow," he said.

"There are others, of course, plus some who have just come back and I myself am not fully there yet after having Covid-19."

Manchester City Pep Guardiola Football
Get the latest updates on India vs Australia Series, check out the India vs Australia Schedule for 2020-21 and Ind vs Aus live score . Like us on Facebook or follow us on Twitter for more sports updates. You can also download the NDTV Cricket app for Android or iOS.