Guardiola's name has been linked with jobs at a raft of top-flight clubs and countries after his decision to step down as coach of Barcelona after four years in charge in which he delivered 14 trophies, including two Champions League titles. 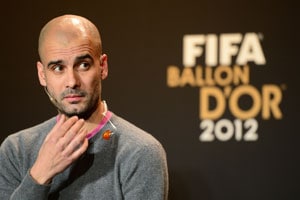 Former Barcelona coach Josep Guardiola, currently on a one-year sabbatical, said Monday he was already thinking about a return to coaching but stressed he didn't know at which club.

"I want to coach," said Guardiola, who left the Nou Camp last summer. "I'm young, I'm only 41 years old. Now I have another type of life, a type of life that I wanted to have at this moment, that's it.

"I don't have a team to go to, but yes, I'd like to return to coaching.

"I have taken a decision to return to coaching but beyond that no decision has been taken."

Guardiola's name has been linked with jobs at a raft of top-flight clubs and countries after his decision to step down as coach of Barcelona after four years in charge in which he delivered 14 trophies, including two Champions League titles.

But he played down any link to either German giants Bayern Munich or Brazil, hosts of the 2014 World Cup.

"Bayern have a coach by the name of Jupp Heynckes. It would be disrespectful on my part to speak with a club that currently has a coach," he said, then turning to Brazil, where his name was evoked after the departure of Mano Menezes.

"It's an honour that they spoke of me, but Brazil has great coaches. For example, the one they chose, (Luiz Felipe) Scolari.

"I'm grateful to the Brazilian fans," he said, adding that he thought it best if a national team was managed by someone from that country.

"Pep", as he is known, added that he felt pride at watching the team he once coached, now overseen by his long-time assistant Tito Vilanova.

"I love coming to see Barcelona play. To see them play is a great show," said Guardiola, who was speaking here ahead of the Ballon d'Or ceremony.

"I was lucky enough to have been with the team for a few years, and I'm delighted that everything's continuing as normal or even better.

"I feel happy that a club is admired and respected for its game," he said, adding that he now followed football as a "television fan" from his US base.

Barcelona, who on Sunday dispatched Espanyol 4-0 in league action, remain 16 points clear of bitter rivals Real Madrid in La Liga and 11 ahead of second-placed Atletico Madrid.

Barca's record-breaking Argentina forward Lionel Messi is poised to become the first player to win four successive Ballon d'Or awards on Monday, sealing his status as the greatest player of his generation.

The 25-year-old is the overwhelming favourite to see off the challenge of Barcelona teammate Andres Iniesta and Real rival Cristiano Ronaldo for the prize.

It will crown another landmark year for the Argentine who is the top scorer in La Liga this season with 25 goals having also broken Gerd Mueller's 40-year record for the most goals in a calendar year.

He finished 2012 with an astonishing 91 goals in all competitions.

Other awards on Monday will see Guardiola in the running for the best coach award.

He will be up against Vicente Del Bosque -- who led Spain to Euro 2012 glory and made them the first side to win three back-to-back tournaments -- and Real Madrid's Jose Mourinho, who has said he will not attend.