After being denied by Monaco last year, there was never really any doubt that PSG would reclaim the Ligue 1 crown this time. 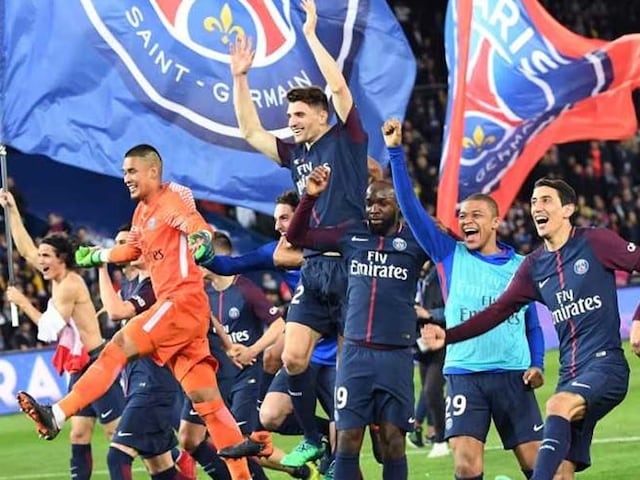 PSG have now won as many domestic honours in 7 years of Qatar ownership as in the previous 41 years.© AFP

Angel Di Maria and Giovani Lo Celso scored twice as Paris Saint-Germain secured a fifth Ligue 1 title in six seasons on Sunday with a 7-1 rout of last year's champions Monaco. It may have felt in many respects as though PSG's season ended a month ago, but this Sunday they find themselves celebrating reclaiming the title, their second trophy in a fortnight. While Neymar is still absent recovering from an operation on a fractured foot, Unai Emery's side took back the Ligue 1 crown in the best possible fashion, demolishing last year's champions Monaco.

A near flawless run of domestic form over the last three months comfortably saw off their nearest rivals, and Sunday's thumping triumph followed a 3-0 win over Monaco in the League Cup final at the end of March.

To their credit, PSG have not wallowed in self-pity since their defeat to Real Madrid in the last 16 of the Champions League in early March, just after the crushing blow of losing Neymar to injury.

"The defeat against Real Madrid was a big defeat, but apart from that I am very happy with what the team has produced this season," said Emery recently.

After being denied by Monaco last year, there was never really any doubt that PSG would reclaim the crown this time.

They have been top since August. Champions for the fifth time in six seasons, Emery's team are on course to set a new points record. There have been only two defeats, against Strasbourg and Lyon.

"The league title is very important to me. It is the main competition and it shows how consistent a team is," Emery said this week.

"The club wants to progress, improve, become the best in the world."

There is certainly merit to be had in dethroning Monaco, but the principality side effectively accepted defeat at the end of August when they allowed Kylian Mbappe to move to the capital, just a few weeks after Neymar was signed for a world record fee of 222 million euros (USD 264 million).

Qatar-owned PSG's budget is about that of Lyon, Monaco and Marseille -- their three biggest rivals -- combined.

PSG have now won as many domestic honours in seven years of Qatar ownership as in the previous 41 years of their history, and they can still win this season's French Cup.

But their financial might -- even regardless of the threat of UEFA sanctions for breaches of Financial Fair Play -- ensures the playing field is so uneven at home, and the Champions League is their holy grail.

A second successive exit in the last 16 means heads will roll at the end of this season in preparation for a new attempt to definitively become part of the European elite.

Emery's contract is due to expire and the Spaniard will not be kept on. With their credibility on the line, Qatar Sports Investments cannot afford to get it wrong when it comes to naming a successor.

But having been linked with the likes of Antonio Conte, Luis Enrique, even Jose Mourinho, instead it seems that Thomas Tuchel will be the chosen one.

Given Tuchel's profile -- a free agent since leaving Borussia Dortmund last year, with just one major trophy as a coach and little European pedigree -- appointing the 44-year-old German may surprise many.

The new man's biggest job will be learning to get along with Neymar, a brilliant player but one whose off-field antics are frequently in the headlines.

That is assuming Neymar remains in Paris for a second season, amid constant speculation of a move away, possibly to Real Madrid.

Other players will certainly leave, with the likes of Thiago Motta and Javier Pastore possibly having won their last Ligue 1 title.

"I have spoken to Neymar. He doesn't know yet when he will be back, but the project here is with Neymar, of course," captain Thiago Silva told TF1 on Sunday.

"I am sure the project here will carry on for us to try to make our dream come true."

Comments
Topics mentioned in this article
Paris SG Monaco Ángel Di María Edinson Cavani Football
Get the latest Cricket news, check out the India cricket schedule, Cricket live score . Like us on Facebook or follow us on Twitter for more sports updates. You can also download the NDTV Cricket app for Android or iOS.