Paris Saint Germain in dark as Ancelotti frustration boils over

Paris Saint Germain struggled to a 0-0 draw at Ajaccio on Sunday with the big-spending French club's poor start to the season perfectly illustrated by a floodlight failure in injury time. 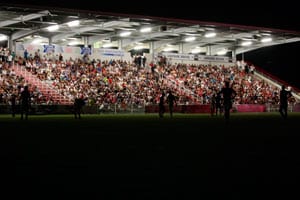 Paris Saint Germain struggled to a 0-0 draw at Ajaccio on Sunday with the big-spending French club's poor start to the season perfectly illustrated by a floodlight failure in injury time.

PSG had been held 2-2 by Lorient in their season-opener last weekend and despite the presence of Jeremy Menez, Ezequiel Lavezzi and Javier Pastore, back from suspension, they were unable to find a way through the Ajaccio defence.

It was all too much for coach Carlo Ancelotti.

Without injured striker Zlatan Ibrahimovic and with defender Thiago Silva also missing, the former Chelsea boss was sent to the stands for kicking out at a water bottle, his anger fired by the sending-off of Lavezzi on the hour mark.

The result left PSG on two points and in mid-table with testing encounters against Bordeaux and Lille coming up.

Meanhile, Marseille made it two wins in two games to go joint top as the former European champions put a little more distance between them and their dismal 10th-place finish last season.

Inspired by unpredictable striker Andre-Pierre Gignac, Marseille defeated Sochaux 2-0 at the Stade Velodrome to go level on six points with leaders Lyon, but in second place on goal difference.

Bastia and Bordeaux also have two wins from two games.

With Loic Remy missing with a thigh strain, former Toulouse star Gignac took centre-stage for Marseille, scoring the opener after 53 minutes before Rod Fanni grabbed the second in injury time.

Gignac's goal was reward after he had come close on three occasions in the first half to open the scoring.

Bordeaux maintained their 100 percent start with a 1-0 win over Rennes thanks to a 75th minute strike from Ludovic Obraniak.

It was Bordeaux's eighth successive win in Ligue 1 over Rennes but a stiffer test awaits Francis Gillot's men next weekend when they travel to the capital to meet PSG.

On Saturday, Bafetimbi Gomis scored a double as Lyon went top with a 4-1 home win against promoted Troyes as champions Montpellier fell to a shock 2-1 defeat at Lorient.

Montpellier had led until the dying minutes after Emanuel Herrera's 37th-minute opener but late strikes from Alain Traore and Jeremy Aliadiere gave the Brittany outfit their first win of the season.

The French international, who has had a promising start to the season after a 2011-12 blighted by injury, is suffering from suspected ligament damage.

Gourcuff was forced off the pitch with a right knee sprain and was replaced by Clement Grenier who nevertheless had a positive impact on the match.

Despite the hosts dominating, Troyes took the lead when on loan Paris Saint Germain striker Jean-Christophe Bahebeck picked up a Fabrice N'Sakala cross from the left wing after 47 minutes.

But Gomis levelled four minutes later with a header off a Grenier corner. Brazilian striker Michel Bastos gave Lyon their second on 66 minutes with an acrobatic pick up of a Yohann Thuram-Ulien cross.

Argentinian Lisandro Lopez (88) was also on target before Gomis added his second two minutes into injury time to ensure Lyon won their opening two games for the first time since the 2005-2006 season.

Comments
Topics mentioned in this article
Football Gareth Bale Arsenal Barcelona AC Milan Zlatan Ibrahimovic
Get the latest updates on ICC T20 Worldcup 2022 and CWG 2022 check out the Schedule, Live Score and Medals Tally. Like us on Facebook or follow us on Twitter for more sports updates. You can also download the NDTV Cricket app for Android or iOS.