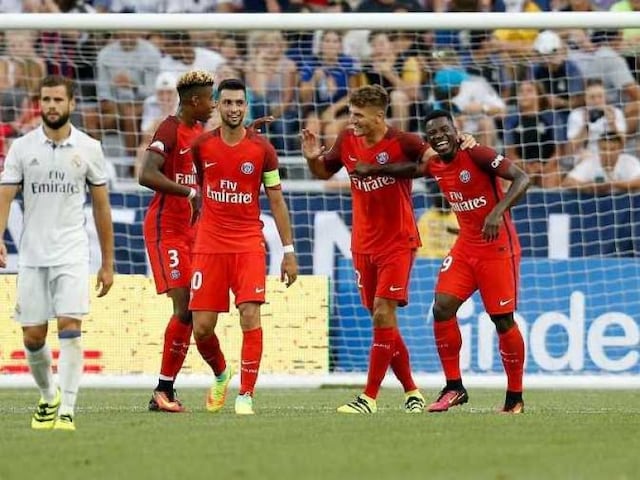 Thomas Meunier (12) of Paris Saint-Germain FC is congratulated by his teammates after scoring a goal.© AFP

Jonathan Ikone scored the opening goal for PSG in the second minute, only for substitute defender Thomas Meunier to score a brace and make it 3-0 for the Ligue 1 champions in the first half.

Marcelo scored the European champions' lone goal in the first half.

However, PSG received a setback after their captain Thiago Silva was substituted in the tenth minute due to injury.

Real Madrid came back strongly in the second half, but were denied another goal by PSG.

The defeat comes as a shocker to Zinedine Zidane's men, who had defeated Atletico Madrid after a 5-3 penalty shootout in May.

On the other hand, PSG would be upbeat after decimating the Spanish giants, whose tour to the United States began on a losing note.

Comments
Topics mentioned in this article
Paris SG Real Madrid Thomas Meunier Football
Get the latest Cricket news, check out the India cricket schedule, Cricket live score . Like us on Facebook or follow us on Twitter for more sports updates. You can also download the NDTV Cricket app for Android or iOS.