Indian football coach Igor Stimac said his team is capable of upsetting Oman in their World Cup qualifying opener but conceded that the visitors will start outright favourites. 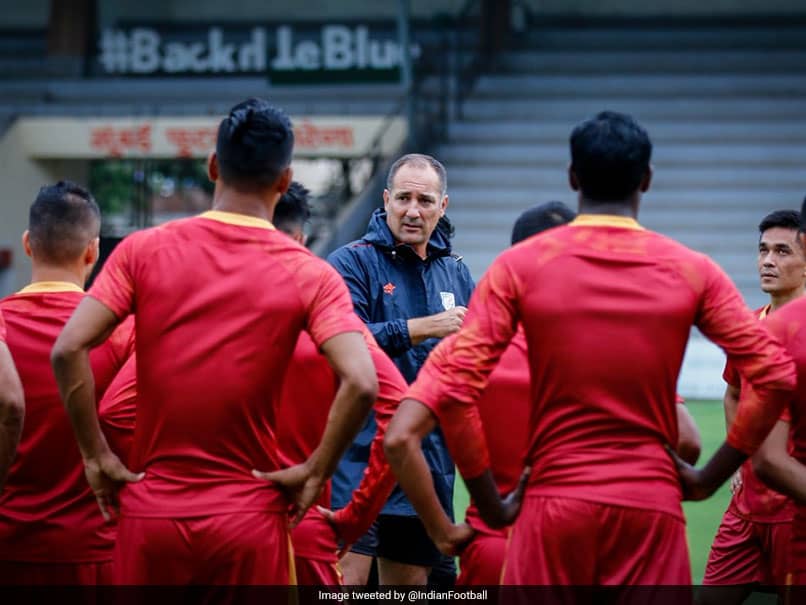 Igor Stimac had experimented with the line-ups during the Kings' Cup and Intercontinental Cup.© Twitter

India football coach Igor Stimac on Tuesday said his team is capable of upsetting Oman in their World Cup qualifying opener but conceded that the visitors will start outright favourites in the September 5 clash. Stimac, who took charge of the team in May, predicted a tough match on Thursday, considering that India have never won any FIFA-recognised match against Oman.

"Realistically, Qatar and Oman are the favourites in our group. We have never won an official match against either of them. So it's not going to be easy at all. In Guwahati we are going to give everything on the pitch, aiming to win it," Stimac told PTI in an interview.

"Results are important now and they are our priority. We have used the last few months wisely. I feel we are ready for the challenge," said the 51-year-old who had experimented with the line-ups during the Kings' Cup (in June) and Intercontinental Cup (in July).

The last meeting between the two teams ended in a goal-less draw in a friendly game in December last year in the run-up to this year's Asian Cup.

"Don't get me wrong but I don't consider friendly games relevant at all. But having said that, there is no taking away from the draw last December in the run-up for Asia Cup," said the former defender who was part of Croatia's 1998 World Cup third place finishing team.

Besides Qatar, Oman and India, the other teams in Group E are Afghanistan and Bangladesh. The Indian team will travel to Doha to play against Asian champions Qatar on September 10.

Each team will play home and away matches till June next year. The top team from each of the eight groups and the four best runners-up across all the groups will advance to the third round of the World Cup qualifiers.

"I think the group is competitive, and is giving us hopes of doing well. After the draw I immediately jumped into my office chair and started the work on Oman and Qatar matches, not thinking for a second about other groups and how easy or tough they are," Stimac said.

"We need to perform well every game to keep our hopes alive, not only against Oman. No game is going to be easy, and that's the way how we need to prepare our players. There are also Afghanistan and Bangladesh in our group and we need to equally respect them," said the former Croatia head coach.

He agreed that given a choice he would have loved to face Oman away first than playing against the Gulf nation at home in the opening match.

"If there was a possibility of choosing where and whom we would have preferred to play our opener, we may have chosen the Oman away match."

Asked if he has got enough matches to prepare for the World Cup qualifiers since his appointment in May, Stimac said, "I had to follow what was agreed before my appointment. Matches are not always pertinent. Practice time with players is more important."

Stimac wants the Indian team to play a brand of football which builds up from the back and goes on attack mode in a smooth transition, and he said the players are excited about the new style.

"I think that (brand of football) is what all of you want us to do, and so do our fans. That's something players are excited about, and look forward to in trying to please all with the improvements they have made. But for me, that is only one of the options available," he signed off.