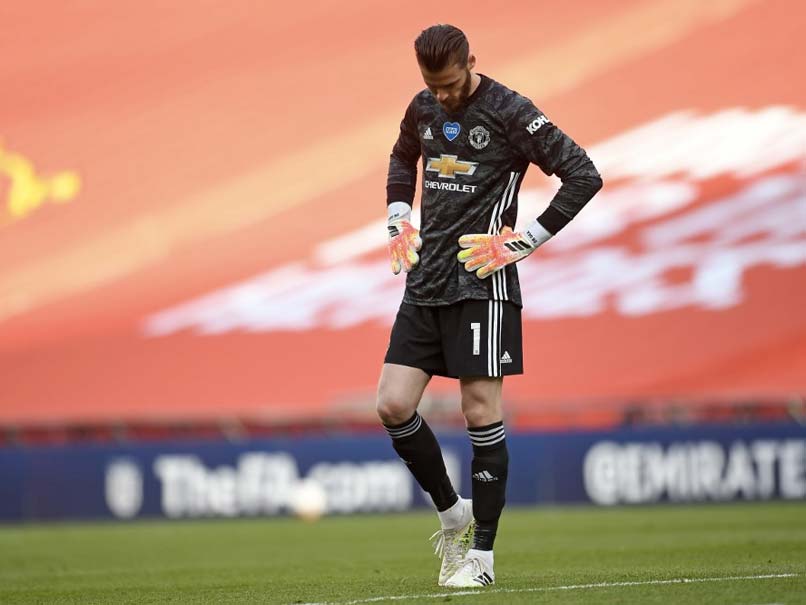 Ole Gunnar Solskjaer says he will stick with error-prone Manchester United goalkeeper David de Gea but with a Champions League place at stake many are urging him to drop the Spaniard. The 29-year-old's blunders at Wembley on Sunday were a hammer blow for in-form United, who went down 3-1 to Frank Lampard's Chelsea in the FA Cup semi-final. De Gea allowed Olivier Giroud's shot to trickle over the line in the dying seconds of the first half and moments after the interval Mason Mount's shot evaded his weak attempted save.

The Times described his performance as a "horror show".

"Of course," replied Solskjaer when asked whether he would keep faith with his number one, with Wednesday's Premier League clash against West Ham next up.

"We have been unbeaten for 19 games and both (reserve goalkeeper) Sergio (Romero) and David (De Gea) have played really well in that run.

"I can't speak for his confidence but he is mentally very strong."

Outspoken United legend Roy Keane recently he was "sick to death" of De Gea after the Spaniard failed to keep out Steven Bergwijn's shot at Tottenham and other commentators now insist he must be taken out of the firing line.

"A confident, assured David de Gea saves all three goals. I would be worried, his inconsistency is costing United games."

The experienced Romero is waiting in the wings, with two Premier League games remaining and a tight battle for the final two Champions League spots.

Solskjaer might rue omitting the Argentine at Wembley, having started him in all the FA Cup ties before the semi-final.

Victory over West Ham on Wednesday would see United climb above Leicester into the Champions League places.

Alan Shearer thinks it is time to hand the gloves to English goalkeeper Dean Henderson, who has excelled while on loan from Manchester United at Sheffield United.

The 23-year-old's 13 clean sheets have played a pivotal role in the Blades' eye-catching return to the Premier League.

"I think you only bring Dean Henderson back to Manchester United as the number one, or you keep him where he is to keep gaining experience," former England captain Shearer said on the BBC.

"I think that time has come."

Shearer's enthusiasm for Henderson to be handed the gloves contrasts with the warning words of United great Gary Neville.

"That's a lonely old place out there to make a mistake if you're a Manchester United goalkeeper," Neville said last month in his role as a Sky pundit.

"With respect to Sheffield United, it's very different to make a mistake there.

"I've seen it before with players during my time -- Peter Schmeichel at the beginning and Edwin van der Sar at the end.

"In between that, there were real challenges for goalkeepers.

"At times we had young goalkeepers who were talented but found it very difficult to cope with the scrutiny, the levels of concentration that are required."

Former Chelsea and Ireland striker Tony Cascarino said De Gea needed to see a therapist to pull himself out of his spiral of decline.

"I went through a period during my playing career when I just could not score goals and it took me a while to realise that I couldn't fix it on the training ground," he wrote in the Times.

"You may think that the problems are technical but the truth is that you are only making the technical errors because of what is happening in your head.

"That is what De Gea is going through at the moment."

David de Gea Football
Get the latest updates on Fifa Worldcup 2022 and check out  Fifa World Cup Schedule, Stats and Live Cricket Score. Like us on Facebook or follow us on Twitter for more sports updates. You can also download the NDTV Cricket app for Android or iOS.