No decision on my future yet, says Jose Mourinho

Mourinho had dropped a major hint as to his future in the immediate aftermath of Tuesday's Champions League semi-final exit at the hands of Borussia Dortmund when he complained of being hated in Spain. 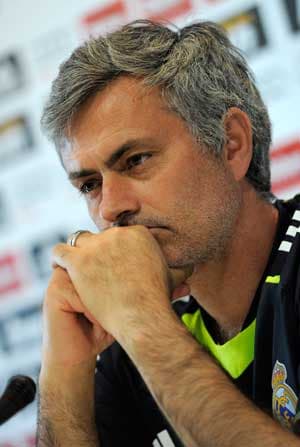 Real Madrid manager Jose Mourinho has still not made up his mind about his future and will only do so once the season has finished, he said on Friday.

"I have not taken any decision on whether I am going or not," said the Portuguese at a press conference ahead of Real's home clash with Valladolid on Saturday.

"I can confirm that there are still five matches left in the league and a Cup final to play and, after those games, I will sit down with the president and (the director general) Jose Angel (Sanchez) and we will speak about my future."

Mourinho had dropped a major hint as to his future in the immediate aftermath of Tuesday's Champions League semi-final exit at the hands of Borussia Dortmund when he complained of being hated in Spain.

"I know that in England I am loved," he said at the time. "I am loved by the fans and the media who are fair with me. They criticise me and give me credit when I deserve it.

"I know I am loved by the clubs, especially one. In Spain it is different because people hate me," he added, referring to the media.

The former Chelsea boss, who is being heavily linked with a return to Stamford Bridge, responded to criticism of his reign at the Santiago Bernabeu, having so far failed to go beyond the semi-finals of the Champions League in three seasons.

"The record-breaking Liga season belongs to me. Only when a team comes along and collects more than 100 points and scores more than 121 goals will that be wiped out," he said, referring to last season's domestic title success.

However, in another hint at his poor relationship with goalkeeper and captain Iker Casillas, Mourinho admitted failing to bring Diego Lopez to the club sooner was a source of disappointment to him.

"If I could have been more demanding at the end of my first season, I would have signed Diego Lopez then. I wanted him but didn't do enough to get him, which is a shame," he said of the 'keeper signed from Sevilla in January after Casillas succumbed to a hand injury.

"With my players - who all like to be treated equally and to have a coach who makes decisions with his head - I have never had a problem," he said.

"Problems exist when one player believes himself to be above everyone else."

Madrid seem certain to finish second in La Liga but a win against Valladolid at the Bernabeu will keep Barcelona waiting at least another week before they can wrap up the title.

The capital club meet their neighbours Atletico Madrid in the Copa del Rey final on May 17.

Comments
Topics mentioned in this article
Football Real Madrid John Terry
Get the latest updates on ICC T20 Worldcup 2022 and CWG 2022 check out the Schedule, Live Score and Medals Tally. Like us on Facebook or follow us on Twitter for more sports updates. You can also download the NDTV Cricket app for Android or iOS.