Nigeria's campaign back on track

Nigeria have narrowed the gap with Guinea in the qualifying tournament for the 2012 Africa Cup of Nations after they trounced Ethiopia 4-0 inside the Abuja National Stadium on Sunday night. 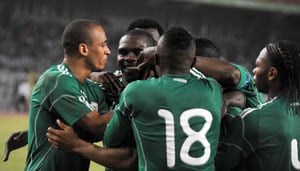 Nigeria have narrowed the gap with Guinea in the qualifying tournament for the 2012 Africa Cup of Nations after they trounced Ethiopia 4-0 inside the Abuja National Stadium on Sunday night.

The victory means Nigeria have now recorded six points from three matches, a point behind Group B leaders Guinea, who forced 10-man Madagascar to a 1-1 draw in Antananarivo, also on Sunday.

Ethiopia remain in third place on three points from as many matches, while Madagascar have a point and are rooted to bottom of the standings.

It was a resounding result for coach Samson Siasia in his competitive debut since he was appointed Nigeria coach in December.

However, the overall performance of the Eagles still left a lot to be desired as they struggled for cohesion in midfield and attack and should have wrapped up this contest in the first 45 minutes.

Real Zaragoza striker Ikechukwu Uche celebrated his comeback from a long-term knee injury by firing home a brace when he came off the substitute bench in the second half for another two-goal star Peter Utaka.

Uche's second strike was a beauty as his long-range effort caught the Ethiopia goalkeeper off his lines a minute to the end of the encounter.

Utaka from Danish club OB Odense got Nigeria off to a dream start within a minute when he stabbed home from inside the six-yard box after a fine work by Everton striker Victor Anichebe.

Ethiopia gained in confidence after this early setback as the Eagles failed time and again to make the most of the endless chances they created.

Utaka then doubled Nigeria's lead eight minutes after the interval when he controlled a through ball before he rounded the goalkeeper.

Uche's first goal was an opportunistic one which was set up by another substitute Osaze Odemwingie, whose introduction really ignited the Nigeria attack after they seem to have lost the plot.

Both teams will clash again on June 4 in Addis Ababa in continuation of the qualifying tournament for next year's Nations Cup to be staged by Gabon and Equatorial Guinea.

Comments
Topics mentioned in this article
Football Nigeria
Get the latest updates on ICC T20 Worldcup 2022 and CWG 2022 check out the Schedule, Live Score and Medals Tally. Like us on Facebook or follow us on Twitter for more sports updates. You can also download the NDTV Cricket app for Android or iOS.