Napoli were missing top scorer Edinson Cavani due to suspension but with Lorenzo Insigne stepping up to the plate admirably, the visitors set their stall out early and should have had several goals in the opening half. 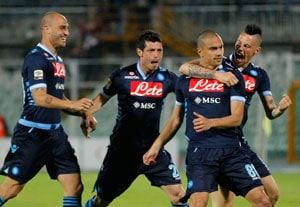 Goals by Gokhan Inler, Goran Pandev and Blerim Dzemaili handed Napoli a valuable 3-0 win away to rock-bottom Pescara on Saturday and put Juventus's title celebrations on hold for at least another week.

Juventus began the day with an 11-point lead on Napoli and would have secured their 29th Scudetto with a win over Torino on Sunday had Pescara beaten Napoli or held the visitors to a draw.

Given Pescara have only won six times in 33 games, that seemed a tall order for the league new boys who, after a 24th defeat of the season, seem destined for a return to Serie B.

Napoli are now nine points shy of Juventus before the 'Derby della Mole' on Sunday and have a 10-point lead on AC Milan in third ahead of Catania's visit to the San Siro.

Napoli were missing top scorer Edinson Cavani due to suspension but with Lorenzo Insigne stepping up to the plate admirably, the visitors set their stall out early and should have had several goals in the opening half.

"You have to score early in these matches, but Pelizzoli was strong in the first half," said Mazzarri, who also lamented some of Napoli's slip-ups earlier this season.

"Points-wise, we've done better than last year but we lacked some consistency. That's what we need to remedy if we are to close the gap to Juventus.

"But tonight we took an important step towards the Champions League, so I'm happy."

Insigne came close twice, including with a goal that was ruled offside, and Marek Hamsik forced two great saves from Ivan Pelizzoli inside 30 minutes.

Napoli eventually made the difference in 12 second-half minutes.

After picking up Hamsik's short pass on the left, Swiss international Inler unleashed a shot from 25 metres which, after deflecting off Marco Capuano, beat Pelizzoli.

Pandev threatened a second on 54 minutes, with Pelizzoli coming to the rescue, and then Pescara came close to levelling when Giuseppe Sculli was given time and space to test Morgan De Sanctis in the area.

Napoli began the day with a seven-point lead on Milan and had hoped to tighten their grip on second place, the last in Serie A which offers direct qualification for the Champions League.

And moments later Pandev made amends for his earlier miss by picking up Christian Maggio's cross to beat Pelizzoli with a well-placed shot.

Pelizzoli had suffered a knock and was replaced moments later by Mattia Perin.

Pescara fashioned a few half chances but the points were well and truly secure when Dzemaili was allowed to stroll across the edge of the area and send a superbly-struck shot past the static Perin on 81 minutes.

Earlier Saturday a well-taken second-half strike from Argentinian midfielder Roberto Pereyra sealed a precious 1-0 win for Udinese away to Cagliari to keep the northerners' push for a place in Europe on track on Saturday.

Cagliari, who started the day only two places but nine points behind Udinese in 10th, finished the match with 10 men after Mauricio Pinilla was shown a straight red for a ridiculous shove from behind on Giampiero Pinzi.

However, by then the damage had been done as Udinese moved up to fifth ahead of the rest of the weekend's programme.

Elsewhere Saturday Atalanta were denied victory against Bologna by a superbly-worked leveller from Alberto Gilardino after Giorgi Luigi's first-half opener for the hosts.

Comments
Topics mentioned in this article
Football Atalanta Fiorentina AC Milan Lazio Chievo Catania Juventus Napoli Chelsea Manchester United Genoa Goran Pandev Blerim Dzemaili Juventus Stadium
Get the latest updates on IPL Auction 2023 and check out  IPL 2023 and Live Cricket Score. Like us on Facebook or follow us on Twitter for more sports updates. You can also download the NDTV Cricket app for Android or iOS.