Nani, who had seen a penalty saved in normal time before the game finished in a 1-1 draw, made no mistake in the shoot-out with his side's fifth and final spot-kick. 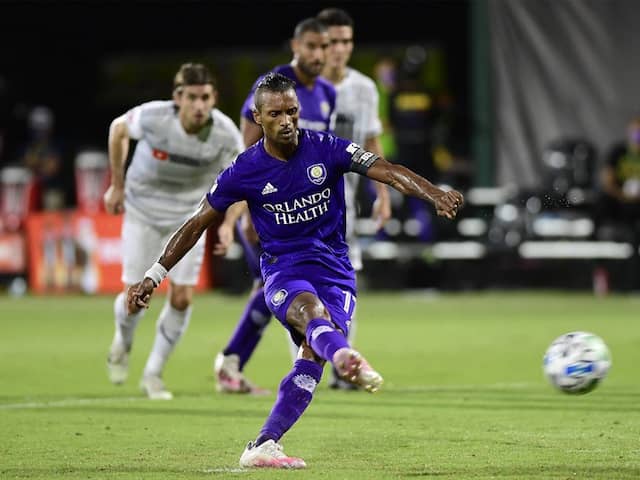 Former Manchester United star Nani scored the winning spot-kick as Orlando upset Los Angeles FC in a penalty shoot-out to reach the semi-finals of the Major League Soccer restart tournament on Friday. Portuguese international Nani, who had seen a penalty saved in normal time before the game finished in a 1-1 draw, made no mistake in the shoot-out with his side's fifth and final spot-kick. The 33-year-old sent Los Angeles goalkeeper Kenneth Vermeer the wrong way before wheeling away to be mobbed by jubilant Orlando team-mates at ESPN's Wide World of Sports Complex in Disney World, Florida.

Nani had been given the chance to seal victory in a tense shoot-out which saw Los Angeles surrender the initiative when veteran defender Jordan Harvey crashed his penalty against the crossbar.

Earlier, Los Angeles had appeared to be heading for a place in the last four after Bradley Wright-Phillips scored from close range in the 64th minute to put the favourites 1-0 up.

That goal came just moments after Vermeer had denied Nani from the penalty spot after Diego Palacios's clumsy foul on Orlando right back Ruan.

But as the game wore on in energy-sapping heat and humidity, Los Angeles were left clinging on as Orlando pressed for an equaliser.

It arrived in the 90th minute when Nani's corner from the right hand side was met by left back Joao Moutinho, who lost his marker to thump home a header.

Orlando will now face either San Jose Earthquakes or Minnesota in the last four, who play in their quarter-final on Saturday.

But it was a disappointing early exit for Los Angeles, who had looked to be on course for their first silverware after a rousing 4-1 victory over MLS Cup champions Seattle in the last 16.

The "MLS is Back" restart tournament is taking place at Disney World in Orlando after a four-month coronavirus shutdown which halted the regular season in March.

Comments
Topics mentioned in this article
Nani Football
Get the latest Cricket news, check out the India cricket schedule, Cricket live score . Like us on Facebook or follow us on Twitter for more sports updates. You can also download the NDTV Cricket app for Android or iOS.