United signed Fellaini from Everton in the closing moments of Monday's transfer deadline day, after several near-misses in the close-season transfer window. 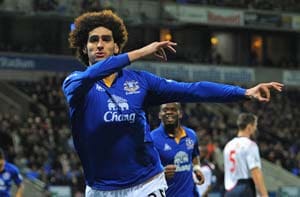 Manchester United midfielder Michael Carrick has welcomed the signing of Marouane Fellaini and says he is not worried about increased competition in central midfield at the English champions.

United manager David Moyes has highlighted Fellaini's ability to play in several different positions, but Carrick says he is not concerned about losing his place in the team.

"It's something I welcome," said the 31-year-old, who was voted into the Professional Footballers' Association Team of the Season by his peers last season.

"The more top-quality players you have in your squad, whether it's in my position or not, the better it is for the team. It's not a case of me thinking, 'I might not be in the team'. I will still have to play well to be in it regardless."

Carrick is currently on international duty with England, who face Moldova in a World Cup qualifier at Wembley on Friday.