Barca's celebration of the goal said it all as a screaming Pedro was engulfed by his teammates, it was a reaction of relief as much as joy. Even in the final stages this was a distinctly un-Barcelona like display. 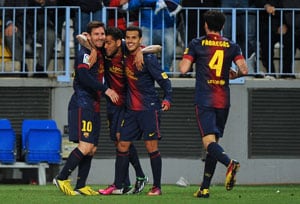 Lionel Messi once again rode to Barcelona's rescue as they squeezed past Paris Saint-Germain on away goals to qualify for an unprecedented sixth consecutive Champions League semi-final on Wednesday night.

However, having been outplayed by the visitors for the first hour, their dependence on Messi was exposed as despite struggling with a hamstring injury that forced him to start the match on the bench, the four-time World Player of the Year was called upon for the final half hour with his side trailing to Javier Pastore's goal on the night and 3-2 on aggregate.

Messi's sheer presence changed the complexion of the game. For the first time in the evening, the Catalan fans rose from their seats to greet their hero as he replaced a frustrated Cesc Fabregas, whilst wary of his threat - even on one leg - the PSG defence seemed to take a step back rather than pressing Barca incessantly as they had done to that point.

Just nine minutes later he sparked the move which proved decisive in the tie. The Argentine skipped past PSG's defensive midfield shield of Marco Veratti and Thiago Motta to release David Villa inside the area and his layoff was smashed into the far corner by Pedro.

Barca's celebration of the goal said it all as a screaming Pedro was engulfed by his teammates, it was a reaction of relief as much as joy.

Even in the final stages this was a distinctly un-Barcelona like display. Villa was sacrificed with six minutes to go for the extra midfield protection offered by Alex Song, but their caution proved justified as starved of the counter-attack on which they had earlier feasted, PSG failed to create another clear opening on goal.

With attention now turning to Friday's semi-final draw in Nyon though, there remains plenty for the Catalans to ponder as they target their third Champions League title in five years.

Overshadowed by Messi's introduction was another defensive injury suffered by Adriano.

The Brazilian rushed his return from a hamstring injury of his own to start in an unfamiliar role at centre-back and his lack of positional discipline was cruelly exposed by PSG. Indeed, the full-back could count himself slightly fortunate to remain on the field after lunging in on compatriot Lucas Moura three minutes before half-time, but the yellow card he did receive will keep him out of the first-leg of the semis even if he should be fit.

With Carles Puyol and Javier Mascherano also out for another number of weeks, 22-year-old Marc Bartra, who replaced Adriano, would seem to be the only option left to Tito Vilanova, but for a club so renowned for blooding its own youth products, Barca's reluctance to give Bartra his chance so far suggests the Camp Nou hierarchy aren't convinced of the Spanish U-21 international's capabilities at the highest level.

Concerns don't just lie in the backline though. Ever since the moment Messi hobbled off at half-time at the Parc des Princes last week, the narrative in Spain has been whether Barca are "Messi-dependent". The answer of Wednesday night was overwhelmingly yes.

Interestingly, on the two occasions the Catalans have failed to lift European football's biggest prize in the past four years, their reliance on Messi has also been highlighted as a problem.

However, in those cases there was always a caveat. In 2009 when losing to Jose Mourinho's Inter Milan the issue was the failure to imbed Zlatan Ibrahimovic into the Barca system. A problem that was successfully solved by the signing of Villa and sale of the big Swede.

And when Chelsea conquered the Camp Nou a year ago it was easy to point to Villa's absence due to a broken tibia as an excuse for the Azulgrana's inability to breakdown a makeshift Chelsea defence.

On Wednesday there was a different feel, a both positive and negative inevitability. Barca's players and fans were like the characters in a superhero film, watching everything go wrong and clinging to the hope that the hero would come and save them.

The fact he did so, whilst still visibly carrying the injury, was not a surprise. The fact a team that contained the spine of Spain's three consecutive major championship wins were so dependent on him to do so was.

Barca's aura will still make them feared in Friday's draw, but with Real Madrid, Borussia Dortmund and Bayern Munich making up the strongest final four there has been in many a year, you have to wonder whether even Messi's superhuman talents can carry them to another Wembley final.