Mandzukic scored in the 13th minute with a fine volley from Thomas Mueller's cross. 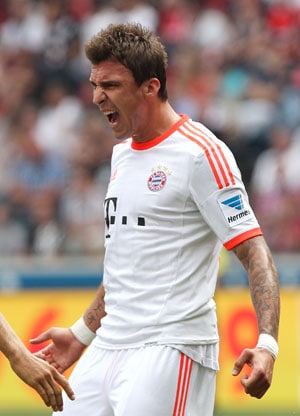 Mario Mandzukic's first-half strike was enough for Bayern Munich to grind out a 1-0 win at Eintracht Frankfurt in the Bundesliga on Saturday.

Mandzukic scored in the 13th minute with a fine volley from Thomas Mueller's cross.

"We didn't want to play nicely and celebrate football, but rather to get the second Bundesliga win of the season. We succeeded there," Bayern goalkeeper Manuel Neuer said.

The home side was left to rue a disallowed goal from Alexander Meier before the break, with TV replays showing offside was the wrong call, though the Frankfurt midfielder may have touched the ball with his hand as he headed in Johannes Flum's goalward effort.

"I thought our time would come, if we didn't concede the second goal. Then we got a goal, at a very good time. It was a regular goal, but the linesman was against it," Frankfurt coach Armin Veh said.

Borussia Moenchengladbach impressed with a 3-0 win over Hannover in the late game.

Max Kruse opened the scoring in the 20th, and Christoph Kramer slid in ahead of two defenders for the second in the 53rd, when Kruse's attempted chip rebounded off the post.

Filip Daems sealed the result with a penalty in the 66th - his 12th successful spot-kick from 12 in the Bundesliga.

While Bayern equaled its club record of 27 consecutive Bundesliga games without defeat set in 1989, Pep Guardiola's side was fortunate to emerge with the win.

Bastian Schweinsteiger did have the chance to seal it in the 89th, but was denied by Frankfurt goalkeeper Kevin Trapp.

Then Srdjan Lakic rounded Manuel Neuer at the other end, only for Dante to clear off the line.

Meier appeared to be hindered in the area by Jerome Boateng and Dante in injury time, but referee Peter Gagelmann waved away Frankfurt's penalty claims.

"Boateng pushes him in the back as he's running. It's clearly a penalty," Veh said.

Bayern was more in control in the first half, when Mandzukic ensured the club scored for the 39th Bundesliga game in succession.

Guardiola's influence could be seen in his side's set-up, with Schweinsteiger dropping very deep to initiate play and Bayern engaging in a short passing game.

Arjen Robben came on for Mueller in the 74th and had a goal ruled out for offside shortly afterward in what was another close call.

Mario Goetze remained on the bench and will need to wait for his Bundesliga debut for Bayern.

"It's never easy after the international break. We only had three days. Still, we created a lot of chances. I'm happy and 100 percent satisfied," Guardiola said.

Hamburg conceded an early goal for the second time in as many games when Roberto Firmino put Hoffenheim ahead in the fifth.

Rafael van der Vaart equalized from the penalty spot in the 44th but the respite was brief.

Kevin Volland put the visitors back in front in the 50th, Anthony Modeste capitalized on an error from Lasse Sobiech to make it 3-1 in the 67th, and he scored again in the 75th thanks to more lax defending, before Roberto Firmino completed the rout with his second in the 78th.

"The defensive play was very, very, very bad," Hamburg coach Thorsten Fink said. "That was a textbook example of how not to do it. We don't need to sugarcoat anything, but we still have to look forward and win back the fans' trust."

Schalke striker Klaas Jan Huntelaar struck the post in the first half, but didn't emerge for the second due to a right knee injury.

Robin Knoche scored after a Wolfsburg corner in the 55th, Vieirinha made it 2-0 with a fine strike in the 61st, Naldo scored in the 67th, and Stefan Kutschke completed the scoring in injury time.

"After the first goal we just fell apart, so I'm not at all happy with the game," Schalke coach Jens Keller said. "I'm going to work with the team on Sunday. I can't just ignore it."

Stuttgart defender Daniel Schwaab's own goal in the 42nd was enough for former side Leverkusen.

"Altogether we weren't rewarded for our efforts. Then to lose through such a stupid own goal is of course twice as bitter," Schwaab said.

Mehmet Ekici scored in the 22nd as Bremen started the season with two wins for the first time since 2006.

"It's still quite clear to us that we have a difficult year ahead of us," said Bremen coach Robin Dutt.

Niki Zimling and Nicolai Mueller scored in the 64th and 68th for Mainz at Freiburg, three minutes before Sebastian Freis scored what proved to be just a consolation.