Marcus Rashford's stunning free-kick 23 minutes from time put Manchester United on the brink of reaching the Europa League final with a hard-fought 1-0 win at Celta Vigo. 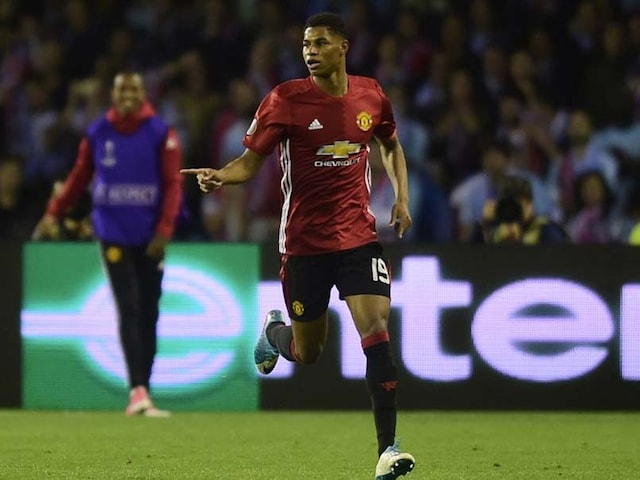 Marcus Rashford's stunning free-kick 23 minutes from time put Manchester United on the brink of reaching the Europa League final with a hard-fought 1-0 win at Celta Vigo on Thursday. Celta goalkeeper Sergio Alvarez kept the Spaniards in the tie before half-time with a string of saves to deny Rashford, Henrikh Mkhitaryan and Jese Lingard. However, he was wrong-footed by Rashford's free-kick as United took a giant step towards reaching the final in Stockholm on May 24.

And United manager Jose Mourinho hailed his wonder kid who has stepped up in the absence of top scorer Zlatan Ibrahimovic due to cruciate ligament damage.

"He's a 19-year-old kid in love with football," said Mourinho.

"He works, he's mature and what matters is not his age but his quality."

Rashford's 11th goal of the season was just reward for United's superiority as they close in on not just the prestige of winning the Europa League for the first time, but also the prize of guaranteed Champions League football next season it would bring.

"In the first-half Sergio had a couple of very important saves and the way we started the game and controled the game in the first half I think we deserved a better result," added Mourinho.

Celta, by contrast, failed to rise to the challenge of their first ever European semi-final, but they did have the first big chance just 10 minutes in.

Nemanja Radoja's cross picked out the unmarked Daniel Wass, but the Dane miscued his header horribly wide with just Sergio Romero to beat.

Thereafter, it fell on Alvarez to keep Celta in the tie.

And he refused to give up hope of making the final.

"Nothing is impossible," said Alvarez.

"We have to recover as soon as possible and go there to show we are a brave team."

His best stop came on 21 minutes when Rashford took aim from just outside the box and his shot was curling into the top corner only for Alvarez's fingertips to turn the ball behind.

Paul Pogba was making his return after missing United's last two outings, and the world's most expensive player looked a class apart in midfield.

A powerful run from the Frenchman teed up Mkhitaryan for the visitors best chance of the first 45 minutes.

However, Alvarez rushed from his line to block from the Armenian.

And Alvarez was called into action again moments later to parry Lingard's imprecise shot after he had been played in by Rashford's through ball.

Pione Sisto was then denied by a fine save from Sergio Romero as the Dane's deflected shot threatened to loop over the Argentine.

Celta's greater attacking intent was offering United more space on the counter-attack and Rashford didn't make the most of one promising opening after skipping past Gustavo Cabral.

However, the 19-year-old showed his class moments later as he won a free-kick on the edge of the area and then picked himself up to curl home a wonderful effort into the far corner.

Aspas had Celta's best chance to respond but fired wide when Jonny's cross was fired into him at an awkward height.

Celta have already overcome losing the first leg 1-0 at home on their run to the last four with a 2-0 win at Shakhtar Donetsk in the last 32.

But the Galicians need lightning to strike twice at Old Trafford on May 11 as United look set for their first European final since 2011.

Comments
Topics mentioned in this article
Manchester United Celta Vigo Zlatan Ibrahimovic Marcus Rashford Football
Get the latest Cricket news, check out the India cricket schedule, Cricket live score . Like us on Facebook or follow us on Twitter for more sports updates. You can also download the NDTV Cricket app for Android or iOS.