Manchester United was knocked out of the League Cup quarterfinals on Wednesday by Crystal Palace, the second-tier club scoring in extra time for a 2-1 victory and its first win at Old Trafford since 1989. 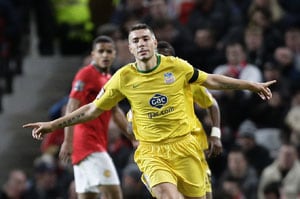 Manchester United was knocked out of the League Cup quarterfinals on Wednesday by Crystal Palace, the second-tier club scoring in extra time for a 2-1 victory and its first win at Old Trafford since 1989.

Striker Glenn Murray then headed a free kick by Ambrose past goalkeeper Ben Amos in the eighth minute of added time to earn Palace a semifinal against fellow League Championship side Cardiff.

Having won on Tuesday, Liverpool and Manchester City will meet in the other semifinal.

Palace, which only narrowly avoided relegation to the third tier last season, is 12th in the League Championship after five games without either a win or a goal scored.

But it surprised the defending Premier League champions, which had not lost a game anywhere against Palace since May 1991.

"We've had a quiet period in the season but we came here in confident mood and the spirit is fantastic," Ambrose said. "We've got a great team spirit, it's a lot different from last year: we can beat anyone, and we showed that tonight.

"We weren't worried about the lack of goals. We've got goal scorers and that showed tonight. It was a great finish from Glenn on the second."

United fullback Fabio da Silva was the only player retained by manager Alex Ferguson from the team that drew 1-1 against Newcastle in the Premier League at the weekend. But Fabio limped out after 37 minutes and was replaced by 19-year-old Ezekiel Fryers.

Ambrose put Palace ahead with a 35-meter (yard) shot into the top corner for his team's first goal in 550 minutes. Macheda scored from the penalty spot after he had been pulled back by Patrick McCarthy, but Murray nodded in the winning goal.