Manchester City qualified for the Champions League after a 0-0 draw at home to Dynamo Kiev, which saw them progress 3-1 on aggregate. 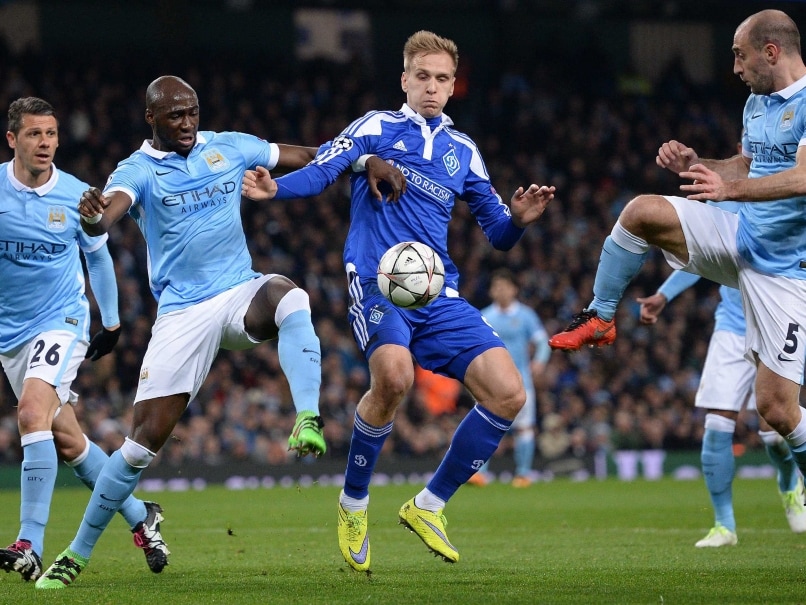 Manchester City's players trudged off the field. Many fans left early. The final whistle was greeted with only a smattering of cheers. (UEFA Champions League: Atletico Mardid Edge Out PSV Eindhoven to Enter Quarterfinals)

It was hardly the way the English club envisaged marking progress to the Champions League quarterfinals for the first time in its history.

Another landmark feat for Abu Dhabi-owned City was achieved on Tuesday thanks to a lackluster 0-0 draw with Dynamo Kiev at Etihad Stadium, which sealed a 3-1 victory on aggregate. Progress came with little fanfare and at a cost, with captain Vincent Kompany hobbling off in the fifth minute with a recurrence of his long-standing calf problems that could keep him out for a month.

"It was really satisfying to make history for this club," City defender Pablo Zabaleta, although it was hard to tell by the end.

Injuries to Kompany and fellow center back Nicolas Otamendi, who hobbled off in the 23rd after a clash of knees, were the major incidents in a soporific match as City advanced with the minimum of concern but without impressing, either.

Kiev, seeking a first Champions League quarterfinal berth since 1999, needed to score three goals to stand a chance of advancing but barely threatened until creating a couple of opportunities in the final minutes. City's reorganized defense stayed relatively solid and the team took few risks, with winger Jesus Navas striking a 61st-minute shot against the post for City's best chance.

"Unfortunately we have lost our match in Kiev," Dynamo coach Sergei Rebrov said.

Atletico Madrid beat PSV Eindhoven 8-7 on penalties to advance after the night's other match finished 0-0 after both legs and extra time.

City's ownership in the Middle East has had tangible reward for their influx of cash since 2008 in the shape of five domestic trophies, including two Premier League titles. Yet progress beyond the last 16 in five seasons in the Champions League has eluded them - until now.

City will be hoping to avoid the likes of Bayern Munich, Real Madrid and Barcelona - should the Spanish champion advance, as expected, on Wednesday - as likely the only English club in Friday's draw for the quarterfinals.

Aside from possibly Sergio Aguero, Kompany was the last person Pellegrini would have wanted to see come off injured given his importance to the team and the assuredness he brings to an often shaky defense.

The Belgium international appeared to get hurt over-reaching as he turned to retrieve the ball under pressure. He immediately kicked the ball out before signaling to the bench and slumping to the ground.

As he stared glumly in anticipation of a third injury layoff this season, the Etihad fell silent and groans were heard.

City's problems exacerbated when Otamendi indicated to come off in the 23rd as he thumped a clearance downfield. Minutes earlier, he had come off worse after a clash of knees with Vitaliy Buyalskiy and had been hobbling around.

City, fortunately, had two center backs on the bench in Eliaquim Mangala and Martin Demichelis, who dealt adequately with Dynamo's sporadic attacks.

"We knew before the game that Dynamo had to score three goals to qualify," Pellegrini said. "We didn't want to force the game. Dynamo didn't take any risks, also. But so many times I think this team receives criticism that we don't know how to defend. I think we defended today without any problems."

Comments
Topics mentioned in this article
Vincent Kompany Manchester City Dynamo Kiev Football
Get the latest updates on IPL 2021, check out the IPL 2021 Schedule and Indian Premier League Live Score . Like us on Facebook or follow us on Twitter for more sports updates. You can also download the NDTV Cricket app for Android or iOS.