Manchester City lives to fight another day in the Champions League 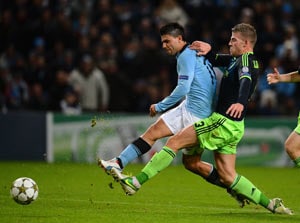 Manchester City lives to fight another day in the Champions League - just.

In reality, the big-spending English champions are unlikely to advance from the group stage for the second successive season after being held to a 2-2 draw by Ajax on Tuesday.

"It's not the case that we're not good enough for the Champions League," City captain Vincent Kompany said.

City conceded twice in the opening 17 minutes from corners, with Siem de Jong exploiting the defensive frailties with a close-range finish and a header.

Although Yaya Toure and Sergio Aguero hauled City back in contention, the hosts couldn't produce a winner.

Aguero had a goal ruled out for offside before Mario Balotelli was denied a penalty in stoppage time when he thought his shirt was tugged, prompting City manager Roberto Mancini to confront referee Peter Rasmussen on the pitch at the final whistle.

"The referee and his staff were really poor tonight," said Mancini, who could face UEFA sanctions. "I think that we scored three goals."

But City didn't and remains bottom of Group D with two points.

It must now beat Real Madrid and Borussia Dortmund in the remaining matches to have any chance of advancing. Even then, City would need results to go its way when Ajax plays Dortmund on Nov. 21 and Madrid on Dec. 4.

City is six points behind Dortmund, four back from Madrid and two adrift of Ajax.

Ajax coach Frank de Boer isn't giving up on the Champions League, either.

"We will try to get a result against Dortmund and try to get second place," De Boer said.

Yet he struggled to explain how his team is fifth in the Dutch league but was able to beat the Premier League champions 3-1 two weeks ago and hold them on Tuesday.

"It's very hard to show the quality every single match," De Boer said. "It's nothing to do with the skills how you play football. It's a mental question, in part due to having a young team."

City's defense took only nine minutes to collapse, two weeks after losing 3-1 in Amsterdam to Ajax.

After Matija Nastasic failed to clear Ricardo van Rhijn's corner with a header, the ball was turned goal-ward by Niklas Moisander and De Jong was on hand at the post to hook the ball into the net.

With Ajax in the ascendancy, the Dutch side again prospered from a corner eight minutes later.

And again it was De Jong.

"We conceded two stupid goals, because in a very important game you can't concede two goals on corners," Mancini said.

The players accepted that.

"It's very important to defend as a team when corners come in, and we've probably let ourselves down on those two occasions," Kompany said. "Those two goals were really not good. We'll look back at the game, try to see what went wrong, and try to improve."

But after a woeful start, a piece of sublime skill from Toure pulled City back into the game.

Samir Nasri's cross wasn't fully cleared, and Toure found the space to bring the ball down with his chest and volley it past Kenneth Vermeer.

City was denied an equalizer on the half-hour when Pablo Zabaleta's header was thwarted by Vermeer's one-handed save.

City responded to the deficit at halftime by bringing Balottelli on for Javi Garcia, and the hosts made a powerful start to the second half.

But Ajax provided a reminder of its threat when De Jong struck the ball from outside the penalty area, only to be denied by Hart's two-handed save.

Aguero, though, squandered a golden opening on the hour. After doing the hard work by rounding Vermeer on the right, Aguero slipped - for the third time in the match - before he could tee up a teammate in front of goal.

There was no slip-up in the 74th. The Argentina striker kept his footing to finish skillfully after latching onto Balotelli's flick-on.

After Balotelli had powerful header pushed away, Aguero thought he had produced the required winner when he nudged the ball over the line from close range.

He was judged to be offside and then Balotelli was denied a penalty as the game ended in acrimony.

Comments
Topics mentioned in this article
Inter Milan Ajax Football Vincent Kompany Yaya Toure
Get the latest Cricket news, check out the India cricket schedule, Cricket live score . Like us on Facebook or follow us on Twitter for more sports updates. You can also download the NDTV Cricket app for Android or iOS.