Paris Saint-Germain captain Claude Makelele said on Wednesday that he regretted criticising Jose Mourinho, his former coach at Chelsea, in his autobiography. 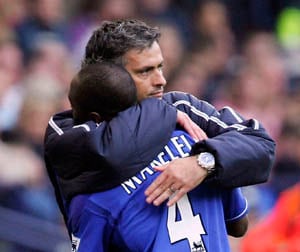 Paris Saint-Germain captain Claude Makelele said on Wednesday that he regretted criticising Jose Mourinho, his former coach at Chelsea, in his autobiography.

"There were lots of misunderstandings," said 38-year-old Makelele, who worked under Mourinho between 2004 and 2007 at the Premier League club.

"Before I left (Chelsea), there was a disagreement with Mourinho, but that happens between a player and his coach.

"He's someone who gave me a huge amount in my career. I appreciate him enormously. There was just a sentence repeated in my book."

In his book, 'Tout Simplement' ('Quite Simply'), released in May 2009, Makelele wrote: "Mourinho is a born winner.

"He knows how to use you and motivate you to get the best out of you. The problem is that he says one thing but thinks something else. In that respect, he is a cruel and ambitious calculator.

"At the beginning, we drank together. The problem is that in the third year, he wanted to get all the credit for himself. No-one could be more famous than him."

Comments
Topics mentioned in this article
Football Chelsea John Terry
Get the latest updates on ICC T20 Worldcup 2022 and CWG 2022 check out the Schedule, Live Score and Medals Tally. Like us on Facebook or follow us on Twitter for more sports updates. You can also download the NDTV Cricket app for Android or iOS.