Magath to discover fate on Wednesday

Felix Magath, coach of Champions League quarterfinalists Schalke 04, will learn his fate in a meeting with the Bundesliga club's bosses on Wednesday. 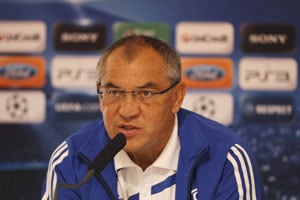 Felix Magath, coach of Champions League quarterfinalists Schalke 04, will learn his fate in a meeting with the Bundesliga club's bosses on Wednesday.

Magath, 57, who has won the Bundesliga title with both Wolfsburg and Bayern Munich, has been under a cloud since reports appeared in the German media last Wednesday claiming he was set to be fired with his side 10th in the league.

The Royal Blues booked their place in the Champions League quarter-finals last week with a 3-1 win over Spain's Valencia and beat Eintracht Frankfurt 2-1 in the German League on Saturday to ease the pressure on Magath.

But club chairman Clemens Toennies has neither confirmed nor denied whether Magath, who has a contract until 2013, will remain in charge after he met with the Schalke coach for 30 minutes in Duesseldorf on Sunday.

"We have discussed the problems in a calm manner," Toennies told German daily Bild.

"Felix will be able to have his say in Wednesday's meeting.

"Until then we have agreed not to say anything further."

When asked about his future after Saturday's win over Frankfurt, Magath had only one reaction when asked whether he will coach Schalke next season.

Comments
Topics mentioned in this article
Football FC Schalke 04 Shinji Okazaki Borussia Dortmund Bayern Munchen
Get the latest updates on ICC T20 Worldcup 2022 and CWG 2022 check out the Schedule, Live Score and Medals Tally. Like us on Facebook or follow us on Twitter for more sports updates. You can also download the NDTV Cricket app for Android or iOS.