Liverpool's Brazilian central midfielder Lucas Leiva has signed a new long-term contract at the club, the Premier League side announced on Wednesday. 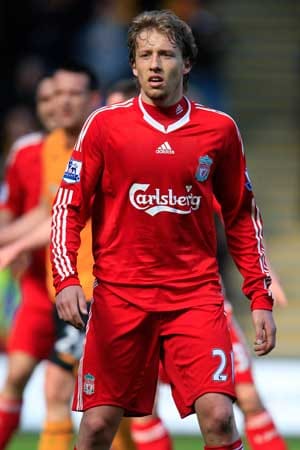 Liverpool's Brazilian central midfielder Lucas Leiva has signed a new long-term contract at the club, the Premier League side announced on Wednesday.

The 24-year-old Brazil international signed from Gremio in 2007 but has only become a first-choice player over the past two seasons and made his 100th appearance for the club in February.

Liverpool did not specify the length of the new contract.

"He is a smashing lad to have around the football club but he hasn't been signed for that, he has been signed because of what he does on the pitch.

"Certainly since I came in (in January) he has been a great asset to the team and has done tremendously well."

Director of football Damien Comolli said: "I am very, very pleased. We have been talking for a few months now, ever since I arrived at the club.

"One of the first things I did after I arrived was to look at the contract situation and to see where Lucas was at.

"I knew we had to do something quickly because we couldn't afford to lose him and didn't want to lose him.

"If you look at his playing record, he started 46 games last year in all competitions and this year it will be between 45 and 50.

"He is exactly what we want. He has the right mentality, quality and attitude."

Comments
Topics mentioned in this article
Football Liverpool Brazil Lucas Leiva
Get the latest updates on ICC T20 Worldcup 2022 and CWG 2022 check out the Schedule, Live Score and Medals Tally. Like us on Facebook or follow us on Twitter for more sports updates. You can also download the NDTV Cricket app for Android or iOS.