In a one-sided match, Colombia rode goals from Pablo Armero, Teofilo Gutierrez and James Rodriguez to beat Greece 3-0, a side that is otherwise known for its defense. Catch highlights from the Group C encounter here. 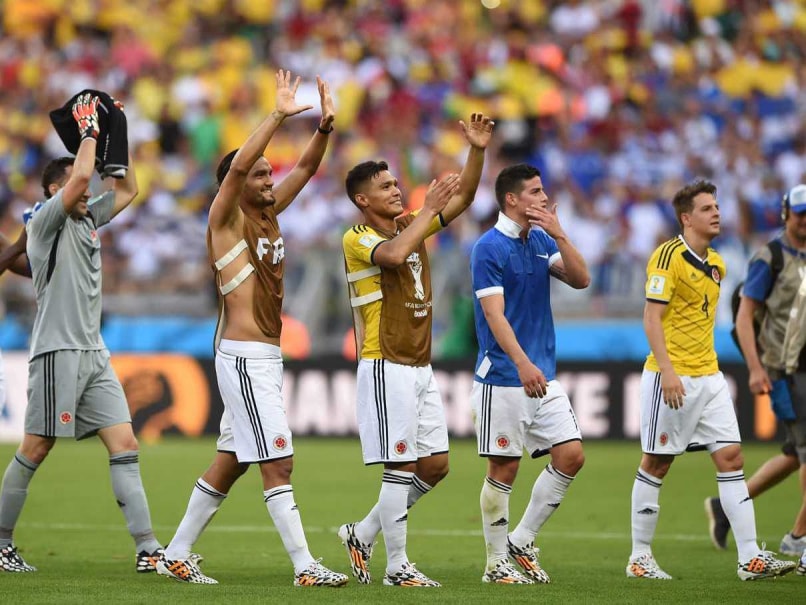 23:17 (IST): 89' Jackson Martinez (Colombia) gets a great dangerous low pass right into the penalty area, but Greece's defense manages to avoid the danger.

23:12 (IST): 84' There's acres of space at the back for Colombia to exploit now but they aren't moving as fluently as they'd like.

23:05 (IST): 76' Another substitution! Teofilo Gutierrez (Colombia) is deservedly given rest as Jackson Martinez replaces him on the field.

23:03 (IST): 74' It's the end of the match for Pablo Armero (Colombia), who is being replaced by Santiago Arias. Armero got the crucial first goal for Colombia in the 6th minute.

23:00 (IST): 71' Ioannis Fetfatzidis (Greece) makes some effort in his corner but the ball ends up far from any of his teammates.

22:57 (IST): 69' The assistant referee puts up his flag. Konstantinos Mitroglou (Greece) was offside there!

22:53 (IST): 64' Konstantinos Mitroglou (Greece) comes on as a substitute and he replaces Theofanis Gekas.

22:52 (IST): 63' GEKAS MISSES SITTER.Oh dear, oh dear. That pretty much sums up Greece's precision in front of goal. Kone does brilliantly to get to the byline and chips the ball back across goal - Gekas only has to head it in front of him and it's a goal but he contrives to hit the bar from six yards out. Unbelievable miss.

22:47 (IST): 58' Teofilo Gutierrez (Colombia) carries the ball straight into the net! Colombia 2 Greece 0. Does that settle it? They haven't come out looking convincing in this second period but, from Rodriguez' corner from the right, Gutierrez manages to beat his man at the near post to guide a right-footed shot past Karnezis.

22:46 (IST): 57'Substitution. Dimitrios Salpingidis (Greece) makes way for Ioannis Fetfatzidis. Salpingidis is booked and then finds himself substituted. Ibarbo's joyful running is becoming less so as he continues to fail in producing a quality final ball.

22:36 (IST): 46' Samaras (Greece) goes down under a challenge but the referee says no way you get a penalty there! Colombia get a goal kick!

And that's half-time. Colombia a goal to the good here. Colombia 1 Greece 0. 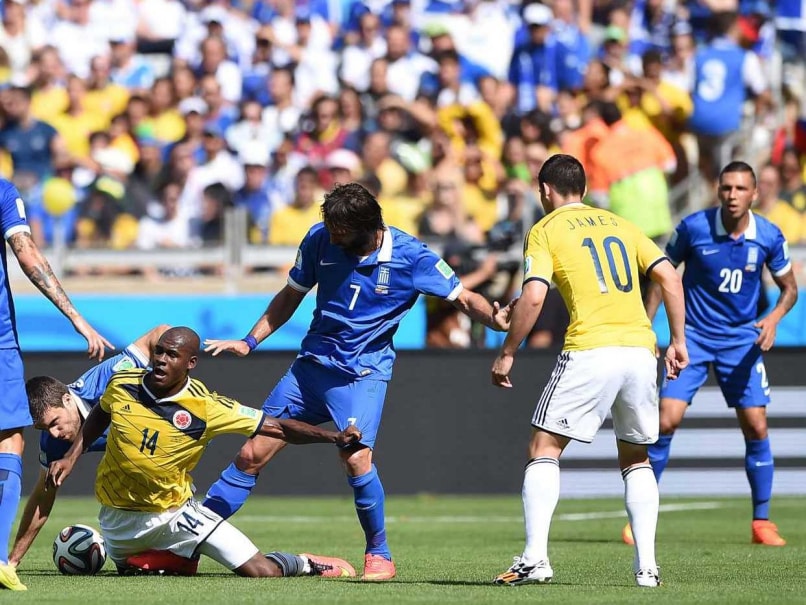 22:12 (IST): 42' James Rodriguez (Colombia) puts the corner way short than required, Colombia 1 Greece 0. Greece have another corner but once again they can't do much with it. Looking as toothless as feared so far it has to be said.

22:07 (IST): 37'The game has settled down a little as the Brazilian sun beats down on Fortaleza. The stadium is near the coast so the heat might not be as much of an issue as it will be in other games - plus of course we've two sides used to playing in warmer temperatures.

21:57 (IST): 26' Carlos Sanchez (Colombia) gets yellow! Geiger has no hesitation at all for this decision. Greece fail to make much from the subsequent set-piece however. Colombia 1 Greece 0.

21:47 (IST): 15' Pablo Armero (Colombia) finds space again but he had to be more perfect there to score. Colombia are starting to the turn the tide a little. The South Americans' pace is proving a real handful so far.

21:42 (IST): 11' Mark Geiger interrupts the game for a brief while. We just had a tactical foul committed by Victor Ibarbo (Colombia). Greece get a free kick. No direct shot at goal though, it wasn't possible from that angle. 21:35 (IST): 6' Pablo Armero finds the back of the net and Colombia are ahead! Sweeping quickly up the other end of the field following that save, the goal was made by Ibarbo, jinking in from the right before James Rodriguez allowed the ball to run inside the penalty area. Armaro scuffed his shot but it hits a defender and trickles past goalkeeper Karnezis. Colombia 1 Greece 0.

21:34 (IST): 5'Great forward movement from Colombia to start up things but the Greek defenders are sticking to their task well. Colombia are wearing yellow shirts and white shorts, playing from left to right. Greece are in their familiar all-blue.

21:29 (IST):The teams are out and going through the national anthems. For Greece, there's no Konstantinos Mitroglou in the starting line-up - his place has been taken by Theofanis Gekas. Colombia choose Teofilo Gutierrez to lead the attack, though he'll gain plenty of support from James Rodriguez and Victor Ibarbo.

21:00 (IST): The Greeks will rely on the same miserly defensive tactics that saw them unexpectedly win the European Championships some ten years ago - although the names on the team sheet have changed. For Colombia, this is their first World Cup finals game in 16 years and the enthusiasm coming into the campaign has been doused somewhat by injuries to Falcao - as well as Edwin Valencia, Luis Perea and Aldo Ramirez.

20:58 (IST): Good evening and welcome to Estadio Mineirao in Belo Horizonte, where a Colombia outfit who've lost some of their lustre in light of the World Cup withdrawal of leading striker Falcao, come up against a Greece side who threw away the keys to their parked bus years ago.

Colombia and Greece clash on Saturday in Group C plagued by fears over where their World Cup goals will come from. The South Americans were rocked when talismanic striker Radamel Falcao lost his battle to be fit for the finals after suffering a serious knee injury playing for French club Monaco in January. 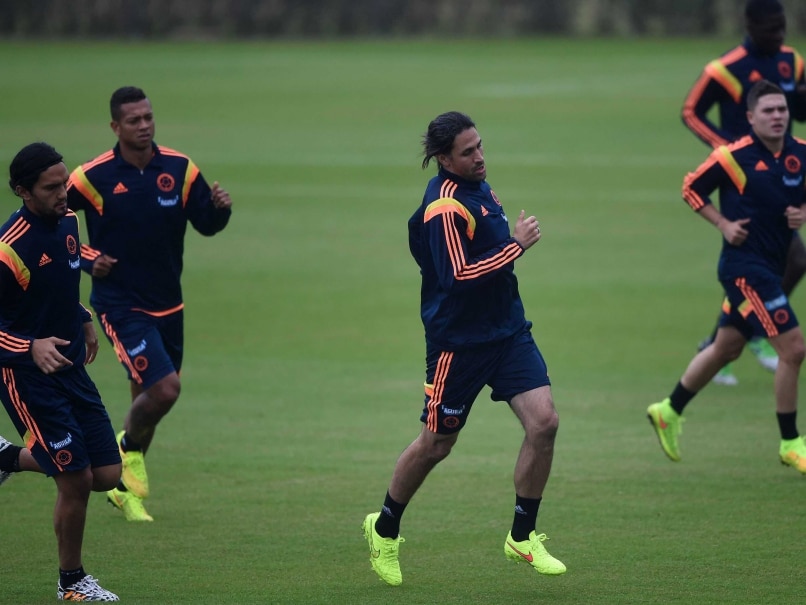 Immediately, Jose Pekerman's team lost a man who has scored 20 goals in 51 internationals since his debut in 2007. The 28-year-old was his country's top scorer in the qualifying campaign as his nine goals helped Colombia make the finals for the first time since 1998.

In the absence of Falcao, Teofilo Gutierrez, who plays his club football at River Plate in Argentina, is expected to carry his team's goal-scoring burden starting against the Greeks.

Greece, the shock European champions in 2004, were knocked out in the first round in South Africa in 2010. They can call on first-choice striker Kostas Mitroglou who has plenty to prove after his £12 million (15m euros, $20m) move from Olympiakos to Fulham turned into a nightmare.

The player called 'Pistolero' by his adoring Greek fans made just one start for the London club, who were relegated from the Premier League while he spent most of his time fighting a knee injury. The 26-year-old has eight international goals but he has a knack of scoring at the right time.

He scored twice in Greece's 3-1 home win against Romania in the first leg of their World Cup play-off and found the target again in the return leg in Bucharest. (Read more)

Greece's departure for its World Cup training base in Brazil has been delayed after its flight was cancelled in the United States. The Greek Football Association says "due to a technical problem of the navigation system of the airplane the flight of the national team from New Jersey to Aracaju (Brazil) was cancelled."

Colombia pulled off an amazing fightback to reach the World Cup for the first time since 1998, rallying from 3-0 down to snatch a 3-3 draw against 10-man Chile in a six-goal thriller. Monaco striker Radamel Falcao was the hero for the home side, keeping his cool to convert two late penalties as Colombia grabbed the point they needed to be certain of qualifying for next year's finals in Brazil. (Read more)