Javier Hernandez's double inspired Manchester United's comeback against Aston Villa, with a 3-2 victory extending the team's provisional lead to four points at the top of the English Premier League on Saturday. 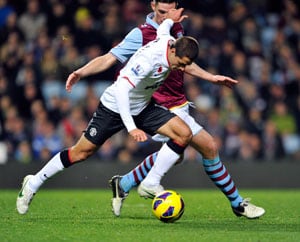 Javier Hernandez's double inspired Manchester United's comeback against Aston Villa, with a 3-2 victory extending the team's provisional lead to four points at the top of the English Premier League on Saturday.

Villa stunned United by taking a two-goal lead through Andreas Weimann in the space of five minutes either side of halftime.

But Hernandez turned the game on its head by scoring United's first goal, seeing his shot deflect off Villa skipper Ron Vlaar for the equalizer, and then heading the winner in the 88th off Robin van Persie's inswinging free kick.

United had looked in serious danger of slumping to its third league defeat when Villa moved 2-0 ahead with 40 minutes left.

United extended its lead at the top over Chelsea - which hosts Liverpool on Sunday - with another of its famous fightbacks, taking its goal tally to 29 in 11 league games.

But Ferguson will be concerned that United again looked suspect defensively against a Villa side which had scored only eight times in the previous 10 league games.

A superb strike from Weimann put Villa ahead in first-half stoppage time. Weimann released Christian Benteke, who shrugged off the challenge of Chris Smalling before spotting the run into the box of the Austrian. Weimann's rising first-time shot from just inside the box flew past United goalkeeper David de Gea into the roof of the net.

Shortly after the break it got worse for United when Benteke's step-over dummy allowed Ashley Westwood's pass to find its way to Stephen Ireland, who released the overlapping Gabriel Agbonlahor. The England striker's precise ball across the box was smashed home by Weimann at close range.

United reduced the arrears after 58 minutes when Hernandez took a flighted pass from Paul Scholes and slipped the ball past Villa 'keeper Brad Guzan.

After 63 minutes an own goal from Vlaar brought United level. Hernandez was again involved as he got on the end of Rafael's cross but his shot deflected off Vlaar past Guzan into the net.

The woodwork twice came to Villa's rescue in the space of 30 seconds with Antonio Valencia's header and Van Persie's dipping shot hitting the crossbar.

Wayne Rooney picked up a knock and was replaced with 10 minutes left as United pressed for the winner. It finally arrived in the 88th when Hernandez stooped down to head home Van Persie's free kick.

Comments
Topics mentioned in this article
Football Arsenal Chelsea Manchester United Wayne Rooney Alex Ferguson Javier Hernandez Aston Villa Liverpool
Get the latest Cricket news, check out the India cricket schedule, Cricket live score . Like us on Facebook or follow us on Twitter for more sports updates. You can also download the NDTV Cricket app for Android or iOS.