From Lionel Messi, to Cristiano Ronaldo, Mohamed Salah, Robert Lewandowski and Erling Braut Haaland, nobody in Europe has managed to keep pace with Lazio's Ciro Immobile. 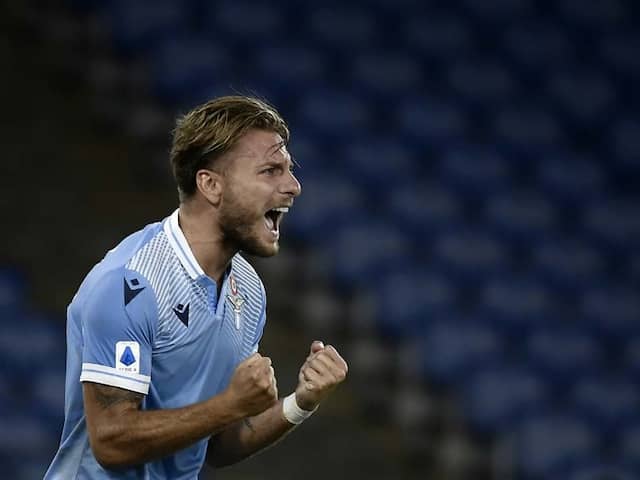 Lazio's Ciro Immobile is set to join an exclusive club as the highest-scoring player in Europe this season. In a decade dominated by Lionel Messi and Cristiano Ronaldo, the underrated Italian is near assured of winning the European Golden Shoe for the continent's top scorer. From Messi, to Ronaldo, Mohamed Salah, Robert Lewandowski and Erling Braut Haaland, nobody in Europe has managed to keep pace with the Naples-born player. Immobile overtook Bayern Munich striker Lewandowski with his 35th goal against Brescia midweek, and will close his campaign against Napoli on Saturday.

Juventus star Ronaldo, on 31 goals, is four behind before the Serie A champions' final game against Roma in Turin, in which he may not even play with the Champions League looming.

It would not be the first time that 30-year-old Immobile has topped the Serie A goal-scoring charts, having won the 'Capocannoniere' twice before in 2014 and 2018.

But he would become just the third Italian winner of the European Golden Shoe after Roma's Francesco Totti (26) in 2007 and Luca Toni for Fiorentina in 2006 (31).

Another two goals on Saturday would also see him surpass Gonzalo Higuain's Serie A record of 36 goals, set playing for Napoli in the 2015-16 season.

"I am only sorry that I cannot celebrate these numbers with the fans," said Immobile, nicknamed 'King Ciro' in the capital, but whose career before arriving in Rome had been erratic.

Success has not followed onto the national team, where he has scored ten goals in 39 games, taking the brunt of criticism after Italy failed to qualify for the 2018 World Cup.

Immobile started his career at Juventus, where he made just three appearances before a breakthrough loan season in 2011-2012 at Pescara where his 28 goals lifted the Serie B side into the top flight.

He couldn't follow up his form the following season with Genoa, but had more success with Torino where he scored 22 goals in 33 appearances to win his first Serie A top scorer award.

An 18 million euros ($22 million) move to the Bundesliga followed, but he scored just three times in 24 appearances for Borussia Dortmund, followed by an unsuccessful six-month spell at Sevilla.

But scoring is something he has done with stunning regularity since joining Lazio in the summer of 2016, at the same time as coach Simone Inzaghi.

He has has flourished in the Inzaghi system playing alongside Luis Alberto and Joaquin Correa, and midfielders Sergej Milinkovic-Savic and Marco Parolo, scoring 102 times in 141 Serie A appearances.

Lazio can thank Immobile for nearly half of their 78 league goals, as he slotted in 14 from the penalty spot.

The title challenge fell off after the lockdown with four defeats in their first five July games as Immobile conceded: "I have not been myself, I need to get back to being calm."

He has scored six goals in his last four games as Lazio, already assured of a return to the Champions League after 13 seasons, target a second-place finish.

"It is a great achievement for him, but also for the whole team," said Inzaghi.

"And then there is Ronaldo, with four goals behind, let's see what will happen.

"Ciro's records would be a nice prize for everyone. He leapt over Lewandowski, he broke every record, he's just missing a goal to reach Higuain."