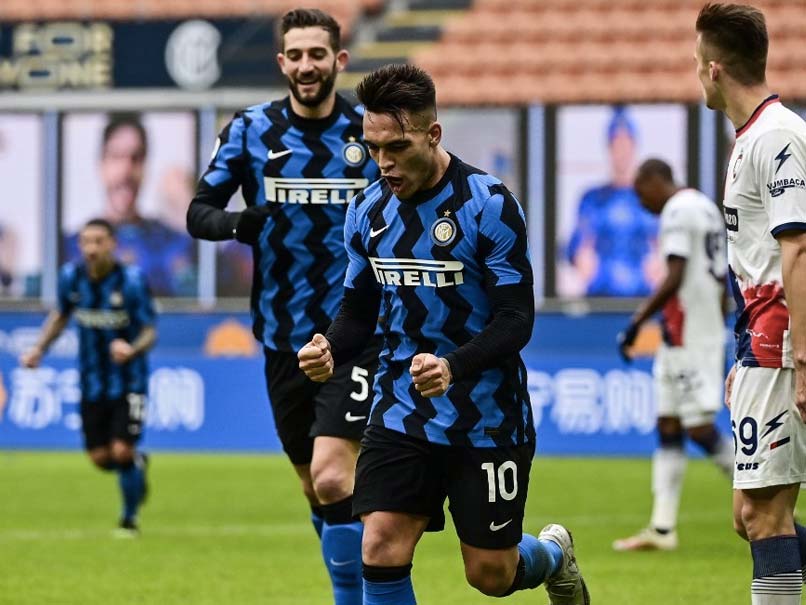 Serie A: Lautaro Martinez celebrates a goal for Inter Milan against Crotone.© AFP

Lautaro Martinez scored a hat-trick as Inter Milan kicked off 2021 in blistering form with a 6-2 win over lowly Crotone on Sunday to take top spot in Serie A. Inter claimed an eighth consecutive league win to move two points ahead of AC Milan who travel to midtable Benevento later on Sunday with champions Juventus hosting Udinese. Martinez and Romelu Lukaku proved decisive for the northerners, the strike duo being involved in five of Inter's goals. Antonio Conte's side had been pegged back 2-2 at the break with Niccolo Zanellato breaking through with a 12th-minute header for the promoted Calabrians who are second from bottom with the worst attack in the league.

But Martinez picked up a Lukaku cross to pull the hosts level eight minutes later.

Martinez had a role in Inter's second just after half an hour when Crotone defender Luca Marrone turned the ball into his own net under pressure from the Argentine forward.

Martinez pulled Inter ahead before the hour connecting with a Marcelo Brozovic through ball and headed in his third with 12 minutes to go off a rebound.

Lukaku blasted in his 50th goal in the Inter jersey after 64 minutes before going off after taking a knock to his thigh, before Achraf Hakimi sealed the win with three minutes to go.

"There is great desire and it shows," said Conte as Inter target their first Serie A title since 2010 with their European campaign over this season.

"It's important to continue like this, we produce and create a lot, we score a lot of goals, it's a pity for the goals conceded."