Inter Milan finished bottom of their group with just one win and missed out on a place in the Europa League. 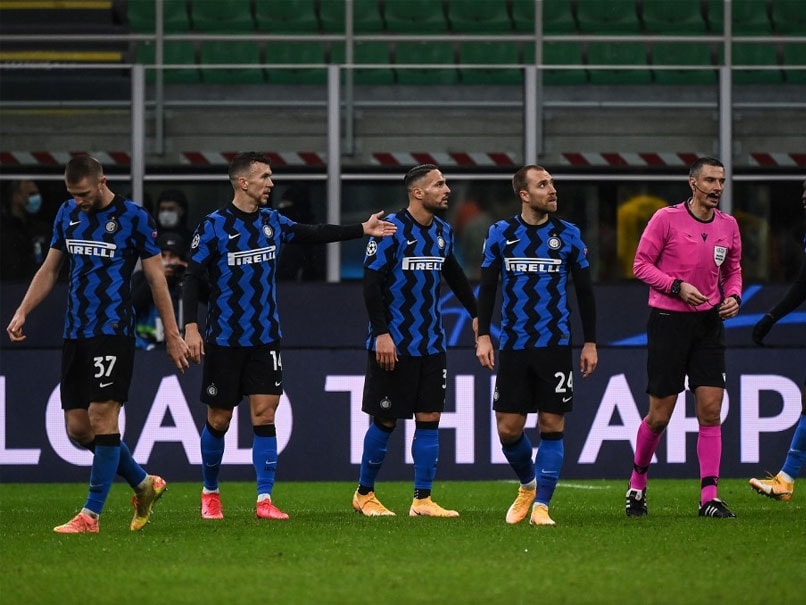 Inter Milan crashed out of the Champions League in the group stage for the third consecutive season.© AFP

Inter Milan crashed out of the Champions League in the group stage for the third consecutive season on Wednesday after a goalless draw against Shakhtar Donetskat the San Siro. Antonio Conte's side had needed a win to advance to the last 16 along with Spanish giants Real Madrid. But the Italians finished bottom of their group with just one win, last week's 3-2 victory over Borussia Moenchengladbach, having also played out a goalless draw in Ukraine.

Real Madrid went through to the knockout phase as Group B winners after a 2-0 victory over Gladbachwith the Germans also advancing in second place.

"It's unbelievable that in 180 minutes against Shakhtar, in two games dominated, we didn't manage to score," said Conte.

"Their goalkeeper was the best on the pitch in both games."

The Ukrainians, who were also eliminated, finished third and will have the consolation of a place in the last 32 of the Europa League.

Inter Milan, who won the last of their three Champions League titles in 2010, have not reached the knockout rounds since the 2011-2012 season.

Conte's side are the only Italian team not to make the last 16 with Juventus, Atalanta and Lazio all advancing.

"These are evaluations that have to be done in a calm and cold way," said the former Juventus and Chelsea coach.

"I don't think you can make these evaluations after such an exit.

"There is a lot of regret but I honestly don't hear that there was a lack of desire, of determination and focus.

Romelu Lukaku led the Inter attack alongside Lautaro Martinez but the giant Belgian striker, who scored two braces this campaign, could not make the difference this time.

Lukaku had scored four of his side's seven Champions League goals this season.

Italy midfielder Nicolo Barella returned for Inter after an ankle injury with Christian Eriksen starting on the bench along with Ivan Perisic.

Conte's side could not find a way past a compact Ukrainian defence despite their early domination.

Martinez rattled the crossbar after six minutes before Ukrainian goalkeeper Anatoliy Trubin got his hand to a header from the Argentine to keep it out.

Trubin, 19, did well to stop two Lukaku headers after the break, with Marcelo Brozovic shooting wide just after the hour.

Brazilian midfielder Tete then tested Handanovic, but the hosts could not break through despite fresh reinforcements with Perisic, Alexis Sanchez, Eriksen, Matteo Darmian and Danilo D'Ambrosio coming on late.

A Sanchez header went over with Trubin denying Eriksen to ensure Inter finished their campaign having failed to win a home match in the group stage for the first time.

"It's very good that we gifted our supporters and ourselves an opportunity to play European football in the spring," said Trubin.

"Of course, we wanted to continue our path in the Champions League, but we could have been eliminated too, so all is good now."

Romelu Lukaku Football
Get the latest updates on India vs Australia and check out  Schedule, Results and Live Score. Like us on Facebook or follow us on Twitter for more sports updates. You can also download the NDTV Cricket app for Android or iOS.