Barcelona midfielder Andres Iniesta believes wrapping up the La Liga title as soon as possible will be the perfect antidote to their Champions League humiliation at the hands of Bayern Munich in midweek. 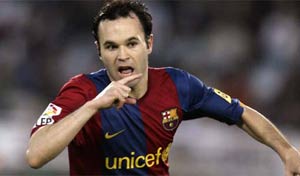 Barcelona midfielder Andres Iniesta believes wrapping up the La Liga title as soon as possible will be the perfect antidote to their Champions League humiliation at the hands of Bayern Munich in midweek.

The Germans' ruthless 3-0 win at the Camp Nou on Wednesday saw them inflict Barca's worst ever European defeat 7-0 on aggregate and Iniesta admitted that after so much success in recent years it was a bitter pill to swallow.

"Both legs have been hard games for the result and for the feelings," he told Barca TV.

"Bayern are well-deserved finalists. They are a team that has found great form and this has been reflected on the pitch.

"We have the feeling that they have been better than us. The reality hurts. It hurts us to have not been at the level required for the situation. Everyone of us gave everything there and here and again we have been left out one step away from the final."

However, Barca could wrap up their fourth title in five years should they manage to beat Real Betis on Sunday night and Real Madrid fail to win against Valladolid 24 hours earlier.

"We have a game very soon and one thing doesn't take away from the other. The league is very close and when there is such a strong blow, sometimes it is difficult to separate things.

"The other day I said that a season can't be bad if you win the league. Hopefully we will win it as soon as possible to be able to once again have this feeling of happiness."

Lionel Messi trained on Thursday morning as he continues his recuperation from the hamstring injury which forced him to sit out Wednesday's second-leg, but is not expected to be risked for the visit of Betis.

Sergio Busquets and Eric Abidal are also doubtful after missing the Bayern game through injury, but Jordi Alba does return from suspension.

Betis have their own injury problems as they look to secure a place in the Europa League next season as Nacho and Jose Canas are both suspended, with centre-backs Paulao and Damien Perquis doubtful.

Real Madrid meanwhile had to get over Champions League disappointment of their own on Tuesday night as late goals from Karim Benzema and Sergio Ramos weren't enough to see them overturn a 4-1 first-leg deficit against Borussia Dortmund.

Ramos also picked up a slight muscular problem towards the end of the game which is likely to see him miss the clash with Valladolid, whilst Cristiano Ronaldo is also doubtful as he continues to feel the aftereffects of a thigh injury picked up in the first-leg against Dortmund.

And Valladolid boss Miroslav Djukic believes his side can learn from the teamwork shown by Bayern and Dortmund against the two Spanish giants over the past week.

"We were all waiting to see what Ronaldo or Messi were going to do in the Champions League ties, but in their opponents we saw what it is to be a team," he told the club's website.

"In terms of quality, the Spanish sides had it all, but in front of them they had incredible work rate. We saw (Arjen) Robben and (Franck) Ribery defending, running, working. This is what we have to learn from them."

Comments
Topics mentioned in this article
Football Bayern Munchen Barcelona Real Madrid Rafael Nadal Andres Iniesta Lionel Messi
Get the latest updates on ICC T20 Worldcup 2022 and CWG 2022 check out the Schedule, Live Score and Medals Tally. Like us on Facebook or follow us on Twitter for more sports updates. You can also download the NDTV Cricket app for Android or iOS.