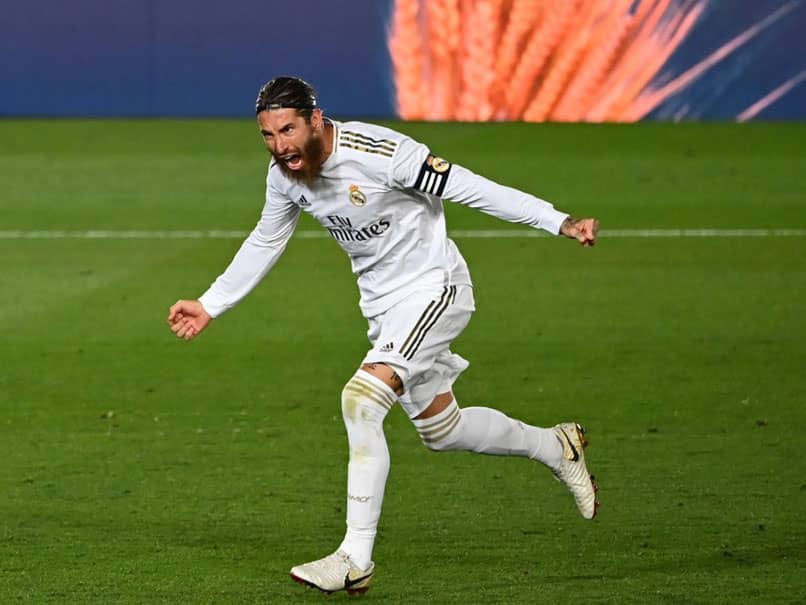 Sergio Ramos converted a penalty in the 79th minute to seal the win for Real Madrid.© AFP

Real Madrid took a big step towards winning La Liga on Thursday by battling past Getafe to move four points clear of Barcelona, with five games left. Sergio Ramos' late penalty proved the difference at the Alfredo di Stefano Stadium where Madrid were made to feel uncomfortable by Getafe but dug out a gutsy 1-0 victory worthy of champions. This was arguably Madrid's toughest fixture remaining and with a four-point advantage over Barca, as well as the superior head-to-head, the trophy is now firmly within their grasp.

"We have not won anything," insisted coach Zinedine Zidane.

"We are doing things well, yes, but there are five games still to go. If we continue like this, staying solid, it will be fine."

It is Madrid's biggest lead over Barcelona since September and their biggest cushion at the top of the table all season.

If they can beat Athletic Bilbao at San Mames on Sunday, Madrid could even pull seven points clear before Barca face a difficult game away at in-form Villarreal a few hours later.

Barcelona's 2-2 draw at home to Atletico Madrid on Tuesday, coming on the back of another 2-2 draw away at Celta Vigo last weekend, gave Zidane's side an opening and they have taken full advantage.

"My job is to make them calm in the difficult moments," said Zidane. "To be quiet, patient, positive. They believe in what we do."

Six wins out six since the restart, with only two goals conceded, has made for a relentless run of form and it would take a monumental collapse now to let Barca back in.

Eden Hazard was left out of the squad as he continues his recovery from a troublesome foot injury but Ramos and the excellent Karim Benzema led the way again.

Raphael Varane went off in the first half with a neck injury.

"He's not well," said Zidane. "He took a hit to his neck and he is at home. The doctor has gone to see him and tomorrow we will see how he is."

Ramos' spot-kick with 11 minutes left was his ninth goal of the season, the best tally of his career.

"He is our leader," said Zidane. "He's unique, unparalleled."

Getafe were in the hunt for the top four before the suspension but one defeat and three draws from their first four games after the return saw Jose Bordalas' team fall away.

Yet after beating Real Sociedad on Monday, this was another encouraging performance that might keep their hopes alive. They sit sixth, five points adrift of Sevilla in fourth.

"We go home disappointed," said Bordalas. "We felt we had control of the game."

Getafe were snapping at Madrid's heels from the start, with David Timor shown a yellow card after 12 seconds, the fastest booking in La Liga since the records started in 2005.

Madrid could hardly escape early on and Thibaut Courtois had to react fast to Nemanja Maksimovic's header which took an awkward deflection of Jaime Mata.

But for all their pressure, Getafe created few chances while Madrid made the best one with their first attack as Vinicius Junior met Mendy's cross from the left but his finish on the slide was clawed away by David Soria.

With Ramos booked, Varane then had to go off. Eder Militao replaced him and he took a yellow card too early in the second half to increase Madrid's discomfort.

Modric shot just wide of the post and then was taken off as Zidane rung the changes. Rodrygo, Marco Asensio and Fede Valverde all came on.

Yet Getafe looked on course for a draw, until the 79th minute when Mathias Olivera made the decisive error.

Carvajal drove to the line and then cut back, throwing his body over Olivera's outstretched right leg. Ramos crept up to the mark and fired in as Madrid march on.

Earlier, Real Sociedad stayed in the race for European qualification by winning 2-1 at home to Espanyol, who stay bottom, now 10 points adrift of safety. Osasuna won 2-0 away at Eibar.