Luis Suarez's penalty sent Atletico Madrid six points clear at the top of La Liga on Wednesday as the leaders survived a scare to beat a resurgent Athletic Bilbao 2-1. 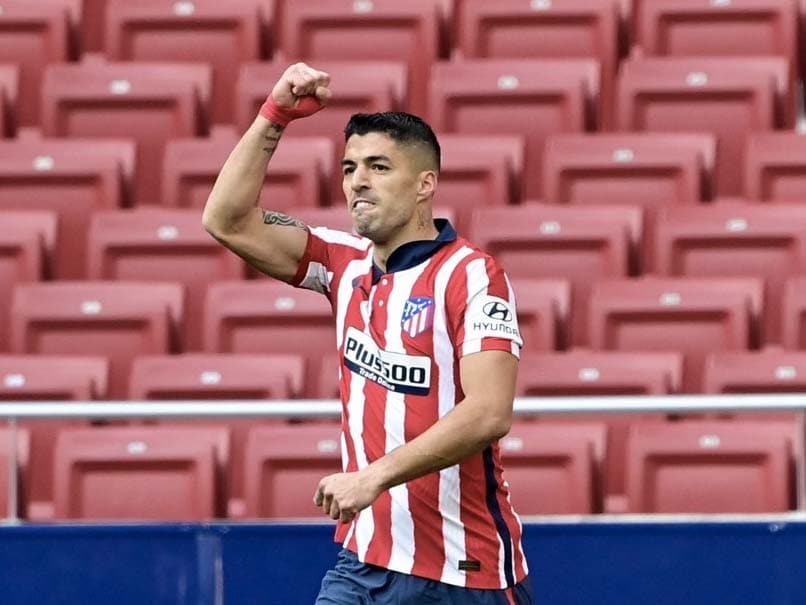 Luis Suarez scored a penalty to give Atletico Madrid a crucial win in La Liga on Wednesday.© AFP

Luis Suarez's penalty sent Atletico Madrid six points clear at the top of La Liga on Wednesday as the leaders survived a scare to beat a resurgent Athletic Bilbao 2-1. Atletico conceded late to draw with Real Madrid on Sunday, a result that kept their opponents in the title race and allowed Barcelona to move just three points behind. But Diego Simeone's side made full use of their last game in hand, with Marcos Llorente's header and a Suarez spot-kick overturning Iker Muniain's opener for Bilbao, who had dominated the first half. Suarez and Llorente have been the driving forces behind Atletico's charge this term and so it proved again at the Wanda Metropolitano, with Suarez scoring his 18th league goal of the season, after Llorente had nodded in his ninth.

"For a year now Marcos has exemplified the word effort," said Simeone.

"He arrived at the club, he wasn't in the team, not even on the bench, but he kept training and making the effort to get to where he wanted to get to and he managed it."

Victory also puts Atleti eight points clear of Real Madrid and while Atletico still have to play at Barcelona in May, a Clasico next month at the Santiago Bernabeu complicates matters further for their chasing rivals.

By conceding to Karim Benzema in the 88th minute on Sunday, Atletico squandered the chance to land a heavy blow on Real Madrid and it would have been easy to let the disappointment linger.

Instead, they rallied to defeat one of the form sides in the league and take another step closer to lifting their first La Liga title since 2014.

"It was certainly very important," said Simeone. "After Sunday, we needed to get back to winning."

Bilbao have been transformed since the appointment of Marcelino Garcia Toral, who in two months has seen them win the Spanish Super Cup, reach the final of the Copa del Rey and climb back into contention for European qualification in La Liga.

His team were stronger and sharper in the first half, pushing Atletico to retreat further and further towards their own goal.

They took a deserved lead when Oscar de Marcos' superb pass sent Inaki Williams in behind and his cutback found the arriving Muniain, whose scuffed finish squirmed its way in.

Atletico struggled for chances but, against the run of play, found a lifeline on the stroke of half-time with a goal very similar to Bilbao's.

This time Thomas Lemar was threaded through and his cross was met by the head of Llorente.

It was a crucial goal, changing the complexion of the second half, with Atletico beginning where they left off.

Llorente found Suarez, who wriggled past Unai Nunez and tumbled over his dangling leg. Suarez drove the penalty into the corner.

Atletico could have made it more comfortable but Yannick Carrasco failed to finish a Suarez cross while Llorente was unable to make the most of openings down the right.

Luis Suarez Football
Get the latest updates on Fifa Worldcup 2022 and check out  Fifa World Cup Schedule, Stats and Live Cricket Score. Like us on Facebook or follow us on Twitter for more sports updates. You can also download the NDTV Cricket app for Android or iOS.