Juventus stretched their lead to five points at the top of the table a 2-0 home win over Fiorentina while Napoli and Lazio drew 1-1. 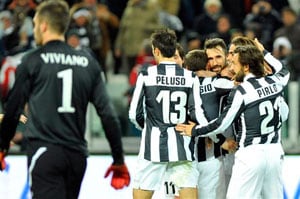 Argentine defender Hugo Campagnaro scored a superb late volley to save Napoli's blushes in a 1-1 draw with Lazio which boosted Juventus's Serie A title defence on Saturday.

Juventus had assured their 17th win of the campaign earlier when goals by Mirko Vucinic and Alessandro Matri, the latter scoring without his boot, secured a 2-0 home win over Fiorentina.

It left Napoli needing to beat Lazio at the Olympic Stadium to restore their three-point deficit but they came up short, dropping two points to see the gap to Juve grow to five points with Lazio in third a point further adrift.

Although Lazio are still without Miroslav Klose, Vladimir Petkovic's side gave no indication they were missing the German striker.

Lazio flew out the blocks and kept the pace high in search of an early goal, and were rewarded when Sergio Floccari chested down Abdoulay Konko's inch-perfect cross to rifle a volley past a rooted Morgan De Sanctis.

Marek Hamsik immediately stung the hands of Federico Marchetti, but his effort was straight at the Lazio 'keeper.

Indeed, it was De Sanctis who would have most work on the night.

He was forced to scramble for the rebound after Antonio Candreva's 35-metre drive had the keeper in trouble. Moments later he was at full stretch to palm away Candreva's angled shot from the right.

Just after the half hour Floccari turned his marker to unleash a right-foot shot from over 20 metres which smashed off De Sanctis's upright as the keeper looked on.

Napoli thought they finally had the ball in the net on 39 minutes, but Edinson Cavani's superb bullet header from Juan Zuniga's deep cross did not cross the line when it rebounded off the Lazio crossbar.

Lazio began with a flourish after the restart and Floccari again had the ball in the net, only to be ruled offside after he nodded home Andre Dias's shot from close range.

Napoli were growing increasingly frustrated as they fought for an equaliser in the face of a disciplined and alert Lazio defence.

However Lazio continued to dominate and spurned the chance to double their lead when Bosnian defender Senad Lulic lobbed the onrushing De Sanctis only for Campagnaro to rush back and clear the danger.

After Pandev's looping header from the edge of the area was collected easily by Marchetti, Napoli looked to have run out of steam.

But from a corner on the right, unmarked Campagnaro rose to smash a superb volley past the rooted Lazio 'keeper from less than 10 yards out to pull Napoli level.

An alert Marchetti then parried Pandev's angled strike in the final minute of time, however Lazio were not finished.

Floccari had the chance to seal it for Lazio in injury time only to send his bullet header spinning off the crossbar as De Sanctis looked on.

Candreva, charging down the right, then saw his angled, deflected drive force a diving save from the Napoli keeper.