Juventus heap misery on Inter with a 2-1 win

Juventus maintained top spot in Serie A and piled the misery on arch rivals Inter Milan with a 2-1 victory at the San Siro. 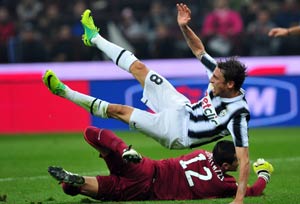 Juventus maintained top spot in Serie A and piled the misery on arch rivals Inter Milan with a 2-1 victory at the San Siro.

Juventus on Saturday, leapt back above AC Milan, who had briefly gone top with a 3-2 win at Roma earlier in the evening, by completing a Milanese double this season having already beaten Milan 2-0.

Goals from Mirko Vucinic and Claudio Marchisio either side of a deflected Maicon strike sealed the points for the Old Lady of Turin.

For Inter they now have just two wins and five defeats in their eight league matches this season and will drop below fifth from bottom if either Bologna or Novara win on Sunday.

Inter dominated large swathes of the opening period but still went in behind at the break. Gianluigi Buffon saved Giampaolo Pazzini's clever back-flick from Maicon's weak shot while Esteban Cambiasso hooked the ball beyond the far post when well placed.

That sparked Juve's best spell of the half as Matri fired wide on the counter attack and then Castellazzi rushed out to block another effort from the striker.

Maicon equalised on 28 minutes after being played in by Wesley Sneijder, although his shot took a decisive deflection off Leonardo Bonucci to deceive Buffon.

Pazzini crashed a header off the bar from Maicon's cross but Juve took the lead again. Marchisio played a one-two with Matri and surged past Cristian Chivu, who had rashly stepped up, before sending a precise low strike beyond Castellazzi.

Juve could also have had a penalty when Castellazzi seemed to upend Marchisio as he clipped the ball past the goalkeeper. The hosts struggled to create clear chances after the break and Vucinic, Alessandro Del Piero and Marcelo Estigarriba all missed glorious chances to kill the game.

Zlatan Ibrahimovic scored a brace and Alessandro Nesta added the other for champions Milan at the Stadio Olimpico in Rome while Nicolas Burdisso and Bojan Krkic netted for the hosts.

Milan coach Massimiliano Allegri was delighted with the Swede. "Tonight he (Ibrahimovic) was excellent, he had an amazing game, as did (goalkeeper Christian) Abbiati who played very well and in some situations, like at 2-1, made important saves," said Allegri.

Ibrahimovic gave Milan the lead with the first clear chance of the game as he got ahead of marker Juan to head home Alberto Aquilani's pin-point cross on 17 minutes.

Nesta headed home from 10 yards out when a sea of red shirts around him parted invitingly as Robinho swung over a corner.