Chelsea captain John Terry will be able to play from the start of the Champions League campaign after his three-match ban was reduced on appeal by UEFA on Monday. 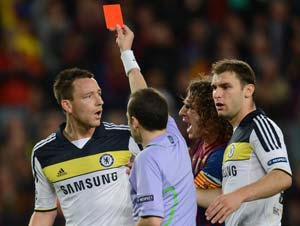 Chelsea captain John Terry will be able to play from the start of the Champions League campaign after his three-match ban was reduced on appeal by UEFA on Monday.

The England defender was sent off in last season's semi-final second leg against Barcelona in the Nou Camp for an off-the-ball clash with Alexis Sanchez.

The offence saw Terry handed an automatic three-match suspension for violent conduct, the first game of which was the final against Bayern Munich, where Chelsea won the title for the first time after a dramatic penalty shoot-out.

But European football's governing body have partially upheld Terry's subsequent appeal, which means he will now also miss the Super Cup clash with Europa League winners Atletico Madrid on August 31, but with the third match suspended for three years.

A statement from UEFA read: "The UEFA Appeals Body has partially upheld John Terry's appeal against the three-match European ban imposed on the Chelsea FC defender at the end of last season.

"Although the central defender is still suspended for three UEFA club competition matches, the third game of the ban has now been deferred for a probationary period of three years.

"The UEFA Appeals Body decided to partially uphold Terry's appeal against the three-match suspension handed down to him by the UEFA Control and Disciplinary Body on 31 May.

"The England player served the first game of his European ban when he did not participate in the UEFA Champions League final against FC Bayern Munchen on 19 May. He will also sit out Chelsea's UEFA Super Cup match against Club Atletico de Madrid on 31 August.

"The original punishment related to Terry's sending-off in the UEFA Champions League semi-final second leg at FC Barcelona on 24 April."

Winners Chelsea qualified directly for the group stages of the Champions League, taking the place of Tottenham, who had finished above the Blues in fourth place in the Premier League.

Comments
Topics mentioned in this article
John Terry Football Barcelona Villarreal Alexis Sanchez
Get the latest updates on ICC T20 Worldcup 2022 and CWG 2022 check out the Schedule, Live Score and Medals Tally. Like us on Facebook or follow us on Twitter for more sports updates. You can also download the NDTV Cricket app for Android or iOS.