Bartholomew Ogbeche struck in the 30th and 45th minutes in front of a packed home crowd at the Jawaharlal Nehru Stadium. 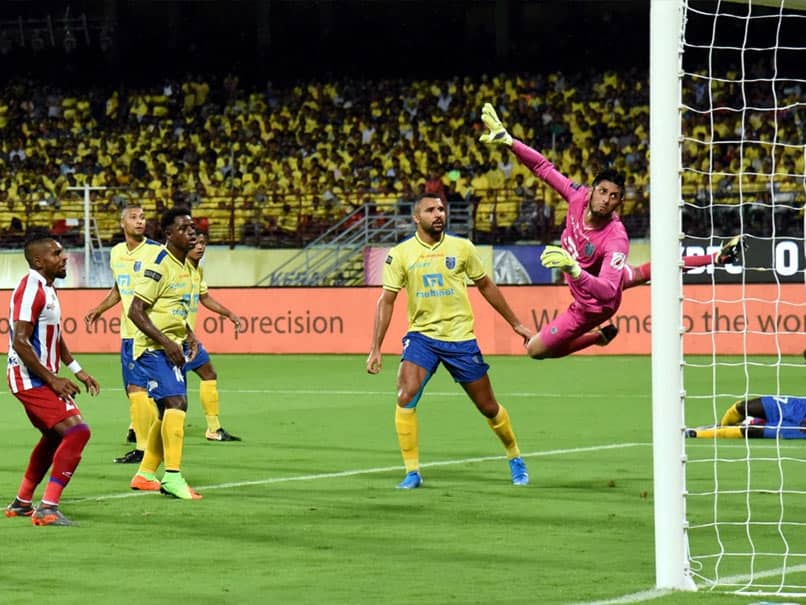 Nigerian striker Bartholomew Ogbeche strcuk a brace to help Kerala Blasters beat ATK 2-1 in the opening match of the Indian Super League season six in Kochi on Sunday. Carl McHugh scored ATK's 100th goal of the ISL in only the sixth minute of the game but the home side, egged on by a vociferous crowd of more than 35,000, hit back with two goals from their new signing Ogbeche to begin their campaign on a winning note. Ogbeche struck in the 30th (through a penalty) and 45th minutes in front of a packed home crowd at the Jawaharlal Nehru Stadium. The result saw Kerala get the better of ATK in their ISL opener once again, having recorded a 2-0 win last season in Kolkata.

The game got off to an electrifying start with the visitors stunning the packed crowd early in the game. ATK capitalised on a free-kick given for a foul on Jayesh Rane by Jeakson Singh.

The set-piece into the box was cushioned back for McHugh by Agustin Garcia Iniguez at the far post. The Irishman went on to slam a brilliant first-time volley with his left foot that gave Bilal Khan in the Kerala goal no chance whatsoever.

With the wind in their sails from an early goal, ATK continued to press Kerala relentlessly and created several chances to double their lead, the best of which came in the 22nd minute.

Roy Krishna embarked on a sizzling run from the midfield, going past a couple of Kerala defenders into the box, but opted to slide it for Javier Hernandez rather than shoot himself and the ball trickled away.

A rattled Kerala were handed a lifeline into the game when ATK winger Michael Soosairaj went down in the box under Sergio Cidoncha's challenge. But the referee waved away the protests and Kerala won a corner from the ensuing counter-attack.

That set-piece would produce the equaliser for Kerala.

Ogbeche saw his looping header from the far post come back off the upright, only for Pronay Halder to pull down Jairo Rodriguez who was about to slot it in.

The referee awarded the spot kick and Ogbeche made no mistake in beating Arindam Bhattacharja to lift the spirits of the home supporters.

The Men in Yellow started to enjoy more time on the ball following the equaliser and stormed into the lead just before half-time.

Pronay failed to clear a low cross from Prasanth Karuthadathkuni and the loose ball was driven in smartly by a lurking Ogbeche. Kerala continued their ascendancy at the start of the second half as well, keeping the ball well and forcing errors from ATK.

However, Krishna continued to threaten the Kerala defence, although his finishing let the visitors down.

In the 69th minute, the Fijian was sent through on goal but a sliding tackle from Jairo meant the chance went begging. Shortly after, Krishna saw another shot from close range blocked away by substitute Mario Arques.

But Eelco Schattorie's home side held their nerves and created a few chances of their own. Ultimately, they saw off the game quite comfortably to start their campaign on a winning note.

Earlier, FDSL chairperson Nita Ambani declared the beginning of the season in the presence of ATK co-owner and BCCI president-elect Sourav Ganguly.

Bollywood stars Tiger Shroff and Disha Patani performed in the opening ceremony along with the internationally acclaimed Indian dance group Kings United just before the start of the match.