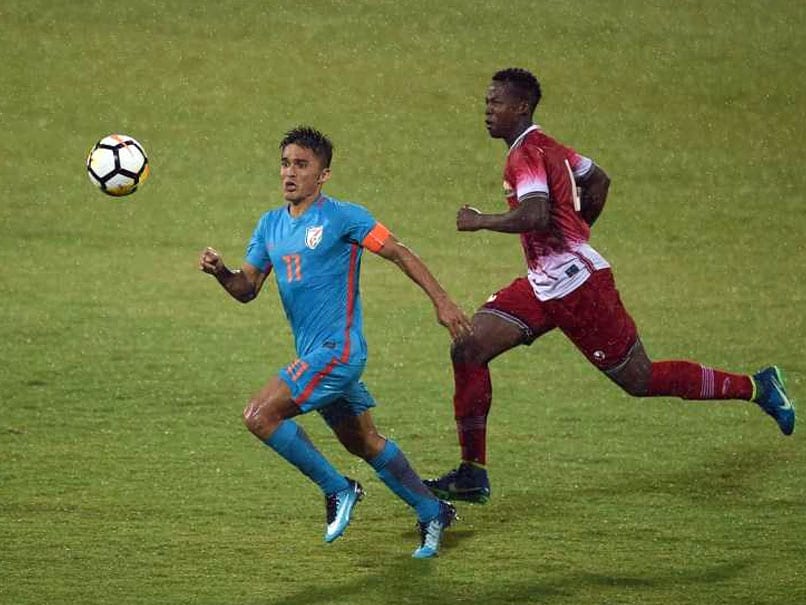 Skipper Sunil Chhetri continued his superb form, striking a brace as India thrashed Kenya 2-0 to clinch the Intercontinental Cup at the Mumbai Football Arena here on Sunday. Chhetri, who scored in the eighth and 29th minutes to hand India a convincing victory, also equalled Argentina's Lionel Messi's tally of 64 international goals, making him the joint-second active international goalscorer behind Portugal's Cristiano Ronaldo (81 goals). With the stadium jam-packed with Indian fans, the hosts started on an aggressive note as they penetrated the Kenyan defense twice in the first minute.

India will look to their talismanic striker Sunil Chhetri as they face Kenya in the summit showdown of the Intercontinental Cup on Sunday. The world's third-leading scorer, Chhetri have so far found the back of the net in each of the three games, including a hat-trick against Chinese Taipei and a brace against Kenya. The tournament is being used by hosts India as a preparatory ground for the AFC Asian Cup, to be held in January next year, and a win in the final will surely boost their confidence going ahead. India had blanked Kenya 3-0 in the league game at the Mumbai Football Arena, which was skipper Chhetri's 100th appearance in national colours. And the India captain made the game memorable by scoring a brace. They will look to replicate the performance of their league game against the African side again in the summit clash, which the organisers have claimed to be a 'sold out' match. The hosts are the side to beat this tournament as they have throughout played an aggressive brand of football. But the Stephen Constantine coached team cannot take Kenya lightly as they have defeated New Zealand 2-1 and blanked Chinese Taipei 4-0 last night. Constantine will ensure that his best playing XI will take the field after his strategy of making seven changes initially in the game against New Zealand backfired as the team lost 2-1.

21:52 IST: 90+3' : And its over! India outclass Kenya 2-0 in the finals of the Intercontinental Cup. Sunil Chhetri's legend continues to grow as he scores twice in the all important final.

21:45 IST : 87' : Corner! Another corner for Kenya another header from Dennis and another MISS! Kenyans succumbing under pressure. Ball sails pass over the net. India still lead 2-0against Kenya

21:33 IST : 75' : BRILLIANT SAVE!Free kick for Kenya from right outside the box and Gurpreet Sandhu puts in a brilliant dive. Great save from the Indian goalkeeper. India still with 2-0 lead but Kenyans are testing Indian defenders really hard.

21:29 IST : 70' : Another opportunity another miss for Kenya! Dennis hits straight in the hands of goalkeeper Sandhu. Kenyans have been right on the money in the second half but have just not been able to find the net. Indian defense needs to concentrate more.

21:24 IST : 66' : Balwant Singh with a free kick but lands straight in the hands of the Kenyan goalkeeper.

21:19 IST : 61' : Two back to back changes for Indian team. Balwant Singh comes in for Jeje Lalpekhlua while Rowllin Borges replaces Holicharan Narzary.

21:12 IST : 54' : Kenyans have brilliantly controlled the ball till now in the second half but have failed to score yet.

21:04 IST : 46' : Brilliant diving save from the Indian goal keeper Gurpreet Sandhu in the initial minute of the second half.

20:47 IST : HALF TIME :Blue Tigers have been of fire in the first half. Skipper Sunil Chhetri has lead the team from the front scoring twice in the eighth and the twenty ninth minute of the game. On the other hand Kenyan defense has been sloppy in the first half while their attackers have been tackled brilliantly by the Indian defense. IND 2-0 KEN

20:41 IST : 41' : Second yellow card for Kenya. Sunil Chhetri takes in the free kick from right outside the box but the ball sails over the the net.

20:34 IST : 34" : Chhetri goes down. Yellow card for Oginga. Sandeep takes the free kick but the ball has been cleared.

20:33 IST: 33' : Kenyan attackers are trying really hard to penetrate but Indian defense has been brilliant so far.

20:28 IST : 28' : GOAL! Chhetri is on Fire. Second goal from the skipper. He is playing on a different level today. Brilliant pass from the centre of the pitch and Chhetri does the rest. IND 2-0 KEN

20:24 IST :24' : Kenyan team on the offensive now but have been brilliantly dealt with by the Indian defense.

20:19 IST : 19' : Counter attack from the visitors. Kenyan attackers get the ball past the Indian defense but the ball goes straight into the hands of the goalkeeper Sandhu.

20:13 IST : 13' : India continues to attack. Possession has mostly been with the Indian team till now. Kenyan defense is under pressure.

20:09 IST: 7' : GOAL! The legend of skipper Sunil Chhetri continues to grow. Free kick from Anirudh Thapa and a brilliant flick from the skipper. Ball lands inside the net. India 1-0 Kenya

20:03 IST: 4': Bollywood actor Abhishek Bachchan cheering the men in blue from the stands.

20:01 IST:It has been a good offensive start by the Indian team, penetrating the Kenyan defense twice in the first minute of the game itself.

19:45 IST:Once again Mumbai Football Arena, Mumbai is jam-packed and fans have gathered in huge numbers to support the home team.

19:30 IST:Boys along with the keepers warming up for the all important final against Kenya at the Mumbai Football Arena, Mumbai.

Boy on the pitch for warm up. #INDvKEN #WeAreIndia #BackTheBlue #AsianDream pic.twitter.com/wmwrK57M3Y

19:25 IST: Hello and welcome to the live blog updates of the Intercontinental Cup Final between India and Kenya

For India, all eyes will again be on Chhetri, who has 62 goals to his credit and will look to add to his tally. He and the experienced Jeje Lalpekhlua can pose challenge to any strong defense and Kenya's would be no exception. India also boast of an array of decent midfielders like Udanta Singh, Anirudh Thapa, Pranay Halder and Halicharan Narzary. They will have to play their roles to perfection if the physically strong Kenyan strikers are to be tamed. At the back, India have experienced defenders like Sandesh Jhingan and Pritam Kotal. Add to it the likes of Subhasish Bose, and the hosts can make Kenya's life pretty difficult. And goalkeeper Gurpreet Singh Sandhu, who was benched in the last game, will be back in action. He will have to surely be at his best.

On the other hand, Kenya would have bolstered their confidence after they drubbed Chinese Taipei, and will look to spoil India's party. Kenya coach Sebastian Migne would want his two main strikers -- Ovella Ochieng and Pistone Mutamba -- to go all guns blazing. While Kenya will seek to take revenge of their humiliating loss in the league stage, the home team will look to end the tournament that witnessed an outpouring of emotions after Chhetri's impassioned plea asking fans to turn up for India games, on a positive note.

Kenya Football Football Live Score Live Blogs India vs Kenya, Final
Get the latest updates on IPL 2021, check out the IPL 2021 Schedule and Indian Premier League Live Score . Like us on Facebook or follow us on Twitter for more sports updates. You can also download the NDTV Cricket app for Android or iOS.