Inter Milan fell further behind Serie A leaders Juventus on Saturday after being held 1-1 at home to struggling Genoa. 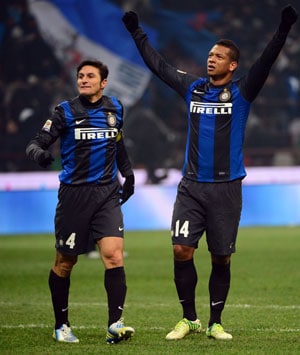 Inter Milan fell further behind Serie A leaders Juventus on Saturday after being held 1-1 at home to struggling Genoa.

Inter, nine points behind the defending champions who beat Cagliari 3-1 on Friday, had to rely on a goal from Argentinian veteran Esteban Cambiasso five minutes from time to rescue a point.

Genoa's Ciro Immobile had given the visitors the lead in the 77th minute with an exquisite shot with the outside of his right foot.

Cambiasso headed the leveller after being set up by Italian forward Antonio Cassano.

The hosts should have stolen all three points in the final minute of normal time but for a remarkable miss by 19-year-old Croatian Marko Livaja, who missed an open goal and hit the post.

The point could ease the pressure on Genoa coach Luigi Delneri, though, they remain second from bottom and have taken just five points since he took over on October 22.

Lazio later leapfrogged Inter into second place, eight points behind Juventus, after edging Genoa's city rivals Sampdoria 1-0 with a goal by Brazilian midfielder Hernanes to take their tally to 17 points from their last 21.

Napoli got back to winning ways -- after two defeats to Bologna in four days in Serie A and then the Italian Cup -- beating bottom side Siena 2-0 with late goals from Christian Maggio, who was set up by Slovakian Marek Hamsik, in the 86th minute and Edinson Cavani who scored his 13th of the season from the penalty spot in the 90th minute.

Juventus needed two goals in stoppage time to seal a come-from-behind 3-1 win at Cagliari on Friday.

Cagliari, just a point above the relegation zone, went ahead after 16 minutes through a Mauricio Pinilla penalty awarded after Arturo Vidal had chopped down Marco Sau in the box.

In a contentious game, Cagliari played the last 30 minutes a man short after the sending off of Davide Astori, who had already been booked, for a foul on Sebastian Giovinco.

Alessandro Matri, playing against his old club, levelled for Juventus 10 minutes later and added another in the second minute of injury time.

Mirko Vucinic put away the third in the fifth minute of time added on.

"I have waited for this moment for a long time. My morale had gone down because I wasn't scoring but I always believed in myself," said Matri, who hadn't found the back of the net since September 29.

Comments
Topics mentioned in this article
Football Inter Milan Genoa Antonio Cassano
Get the latest updates on IPL 2021, check out the IPL 2021 Schedule and Indian Premier League Live Score . Like us on Facebook or follow us on Twitter for more sports updates. You can also download the NDTV Cricket app for Android or iOS.